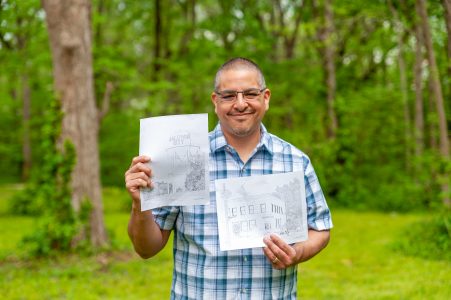 Frank Perez, Baker University's band director, displays Saturday, May 2, 2020, two of the coloring-book-like scenes he created of Baldwin City landmarks. The pages will be available for download at the Lumberyard Arts Center and Baldwin City websites of lumberyardartscenter.org and baldwincity.org.

Baker University’s director of bands is using his stay-at-home time to explore and share the visual side of his creativity.

Frank Perez is creating coloring-book-like scenes of Baldwin City landmarks that residents will be able to download from the Lumberyard Arts Center and Baldwin City government websites of lumberyardartscenter.org and baldwincity.org.

The coloring pages grew from his longtime interest in photography and his desire to do something constructive with the time he was spending at home after Baker canceled on-campus classes last month because of the COVID-19 pandemic.

“I thought this was something I could do that the kids staying at home could enjoy,” he said.

Perez said he also sent the coloring pages to Jeannette Blackmar, executive director of the Lumberyard Arts Center and co-chair of Mayor Casey Simoneau’s Sesquicentennial Advisory Council. Blackmar and the members of the advisory council thought the coloring pages fit with their effort to enhance the virtual celebration of the sesquicentennial while the schedule of the planned community events is in doubt.

Perez said he is just getting started with the series of Baldwin City landmark photos because he wanted to wait until the spring foliage was more fully developed. He plans many downtown scenes and is open to scene suggestions form the sesquicentennial advisory group and Baldwin City residents. Perez wants to create pages that appeal to Baldwin City residents of all ages.

“I see the project going more places with the popularity of adult coloring books,” he said. “I can see pages appealing to a younger audience and some like stained glass windows appealing more to older audiences.”

The current plan is to make the pages available only for online download, but Perez said he was open to sharing his work with a wider audience.

“If it ends up something we publish more formally, that would be great, too,” he said.

Perez developed an interest in photography while attending high school in his hometown of San Diego, Calif. At that time, his interest was night photography, and, with the help of his father, he acquired an early digital camera. Far less sophisticated than the digital SLR models of today, he nonetheless captured a long-exposure view of San Diego. That photo and other examples of his work, including long-exposure night scenes, can be viewed on his website frankperezmusic.com.

He further developed his photography skills as a student at the University of Southern California in Los Angles in the mid-1990s. During his undergraduate years, he worked for the USC student newspaper, helping with its graphic design during the paper’s transition from dark room to digital photography.

During his undergraduate years, he also helped friends and USC the music department create graphics and promotional materials for events, skills that proved useful when when he became a high school band director after graduating in 1998.

Perez said he put his photography interest aside when he started graduate school at USC and later pursued his doctorate at the University of Kansas.

“When I finished my doctorate in 2015, my wife asked what I would like for a graduation present,” he said. “I told her I had always wanted a good DSLR camera. With the help of family members, she was able to get me one.”

Soon after he earned his doctorate, Perez was appointed Baker’s director of bands, and he moved to Baldwin City with his wife Cynthia and their three daughters. Since that time, the family has embraced the community he is celebrating through his coloring pages.

“When I was hired at Baker, we made the conscious decision tp move to Baldwin City because we wanted to be part of the community,” he said. “This is our sixth year of living here. We’ve developed this sense Baldwin City is home for us.”