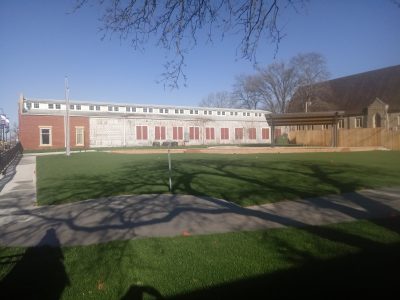 Newly seeded grass grows Sunday, March, 29, 2020, amid the sidewalks, stage and other features installed the last three months in the downtown Baldwin City lot being converted into the new Sullivan Square Park. Work on the park and the city's new police station have not been slowed or delayed because of COVID-19 stay-at-home orders.

Stay-at-home orders issued to slow the spread of COVID-19 haven’t delayed or stopped work on two big Baldwin City municipal projects, one of which is nearing completion.

“Actually, they are putting in the sound and video systems at Sullivan Square now,” he said. “That’s the last piece. They installed the irrigation system and seeded the park earlier this month. The grass looks very nice.”

The park’s features include a 20-foot stage, restrooms, sidewalks, a large community TV and a splash deck. Conceived as venue for at least one event a month, Sullivan Square is unlikely to become a community gathering place until the COVID-19 pandemic abates, Rodden said.

“We were going to have a grand opening ceremony in May 15,” he said. “That will have to be reevaluated.”

The new police station is on track for a midsummer completion and occupancy in September or October, Rodden said. Thus far, work on the 5,330-square-foot facility has involved outdoor construction that doesn’t put worker at risk from COVID-19, Rodden said. He does not foresee problems when the station’s shell in completed and work moves inside.

City government, too, is carrying on operations with no interruptions, Rodden said. The biggest change has been the end of any direct contact between city staff and citizens, he said. City payments or paperwork must now be placed in drop boxes, mailed or submitted electronically.

Rodden said he directed the city suspend utility disconnects for unpaid electric, water and sewer bills before Gov. Laura Kelly’s March 17 order forbidding utility disconnects for nonpayment in Kansas until a statewide disaster proclamation related to the pandemic is lifted. Moreover, the city will not add fines for the late payment of bills until further notice, he said.

Rodden said it was too soon to speculate how the pandemic and related economic downturn will affect the city financially. He noted the city’s grocery store and the Dollar General were two the the city’s biggest sources of sales tax revenue and they “can’t keep anything on the shelves” since lockdowns started.

As for utilities, Baker University is the city’s single largest electric customer and a large water consumer. Although Rodden concedes the closure of campus to students will impact electrical and water revenue, he says the university isn’t completely shut down and is still consuming electricity and water.

“I’m really anxious to see the data,” he said of utility usage and sales tax collections. “I want to see two or three months of data to see where we are.”