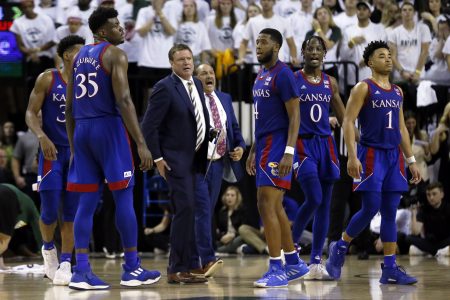 In this AP file photo from Feb. 22, 2020, Kansas head coach Bill Self talks with his team as they come back out onto the court after a timeout during a game against Baylor in Waco, Texas. Kansas won 64-61.

A group of about 30 protesters marched through the neighborhood of University of Kansas men’s basketball coach Bill Self Monday evening in a demonstration against inequities and racial disparities in college athletics.

Organizer Mazzy Martinez, a rising sophomore from Topeka studying strategic communications and history at KU, spoke with the Journal-World ahead of the march.

As the Journal-World has reported, Self has previously put out statements calling for an end to racial divides. However, Martinez said that Self had not acknowledged the Black Lives Matter movement and that “the silence speaks volumes.”

On Tuesday afternoon, Self affirmed in a statement to the Journal-World: “Black Lives Matter to me, to Kansas Basketball and to the University of Kansas.”

In discussing the reasons behind the march Monday, Martinez cited several statistics on race in college sports.

The top 10 highest paid basketball coaches in the NCAA are all white men, according to USA Today.

“But they all have black assistant coaches, which is horrific,” Martinez said. “They use search firms, so it’s just white men looking for other white men, and black coaches don’t get the same opportunities.”

According to NCAA demographics published in March, 80% of Division I head coaches in 2019 were white and all were male. 56% of Division I men’s basketball players were black.

“So what it becomes is white men profiting off of the literal blood, sweat and tears of these young black men, making millions,” Martinez said.

Self’s street, a bit more than half a mile north of Sixth Street and Folks Road, is home to some of Lawrence’s wealthiest residents, several of whom have ties to KU Athletics.

Martinez said the student-athletes train all day and don’t generally get a proper education.

“Their whole life is this sport,” she said. “… If they get injured, they’re screwed and they’re left with nothing to fall back on.”

Even after the NCAA Board of Governors announced in April its support for players to profit off their own likenesses and endorsement deals, legislation must be drafted by the end of October and the schools will take a formal vote in January for rules that would take effect in the 2021-22 school year.

Self told the Journal-World April 29 that he thought it was still too early to tell if compensating student-athletes in this way would benefit college athletics as a whole.

“In theory, it’s positive and I certainly hope it works out,” Self said. “And it may be good over time. … It’s still an unknown, and how it’s going to be regulated and monitored I think could be something that has far more unintended consequences than what we probably have thought through.”

Martinez also pointed out Monday that universities still can’t pay players. Compensation would depend on endorsement deals, and the athletes’ school’s logos or markings could not be part of any sponsorship deals.

As the Journal-World reported May 30, Self, KU Athletics Director Jeff Long and 12 other coaches signed a joint statement calling for an end to racial divides.

Self also joined other Big 12 coaches in a video calling for change. Coaches in the video spoke about the death of George Floyd in Minneapolis, Minn., that sparked protests throughout the world during the past couple of weeks. Self spoke about being “part of the conversation to help create solutions.”

“We all need to take a stand,” Self said in the video.

In his statement Tuesday afternoon, Self told the Journal-World that the protest was peaceful and united “and one that I respect.”

“I did not get a chance to speak to the protesters but I do fully support the message that Black Lives Matter,” Self said. “There is an opportunity now more than ever to create change and address the social injustices that have occurred for way too long. I can’t wait for our student-athletes to get back on campus where we will be advocates in multiple ways to inspire and create the change that is so desperately needed.”