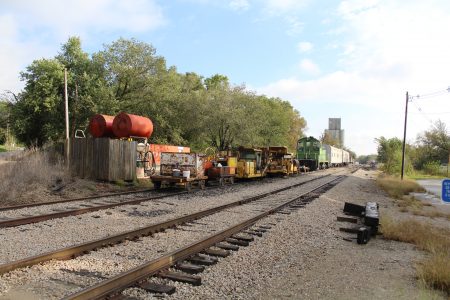 Baldwin City plans to apply next month for a Kansas Department of Transportation grant to install a multiuse trail on the easement along the Midland Railway tracks the city purchased in 2018. The grant would help build the trail along the tracks within the city limits.

After purchasing a multiuse easement along the length of Midland Railway in April 2018, Baldwin City will soon apply for a Kansas Department of Transportation grant to help install a concrete trail on the section of the easement within the city limits.

Baldwin City Administrator Glenn Rodden said the city would apply in October for a KDOT transportation enhancement grant that would provide 80% of the construction cost of the trail. The trail would follow about 4,000 feet of track from the south side of U.S. Highway 56 to Lawrence Avenue on the east side of town.

The city has had success with such grants, which helped make improvements to the old Santa Fe Depot in Baldwin City. KDOT usually announces the grant awards in late winter.

The plan to construct a multiuse trail linking with the Prairie Spirit and Flint Hills trail state parks that already connect to Ottawa prompted the Baldwin City Council to approve the $345,000 purchase of the nearly 11 miles of easement along the Midland tracks in 2018.

Adding urgency to that purchase was flood damage to the Midland Railway tracks that limited Midland excursion trains and those of the Kansas Belle Dinner Train, which uses only the northern 5 miles of the tracks in a contractual arrangement with Midland. Midland Railway could not afford to repair the tracks until it sold the easement.

Baldwin City sought to recoup all but $94,000 of its $345,000 investment in the easement by asking Douglas and Franklin counties to each contribute $94,000. Various economic development groups and private donors were also asked to contribute.

Douglas County agreed to contribute the requested $94,000 in July 2018. Rodden said last week the economic development groups and private donors also have provided about $63,000. However, the Franklin County Commission has not yet contributed, leaving Baldwin City with an about $188,000 investment in the easement.

“I’m still hopeful Franklin County will contribute,” Rodden said. “I know the commissioners know the value of the trail, which would benefit Franklin County more than anyone because of existing trails there. I think it’s a matter of them finding the right funding method.”

The KDOT grant application will provide no funds to carry the trail the 10 miles beyond the Baldwin City limits to Ottawa. With an estimated price tag of $14 million, it will be years before that section of trail is completed, Rodden said.

“Nobody has that kind of money,” he said. “There are all kinds of public and private grant opportunities available. We’re looking to appointing a multicounty committee to help move forward.”