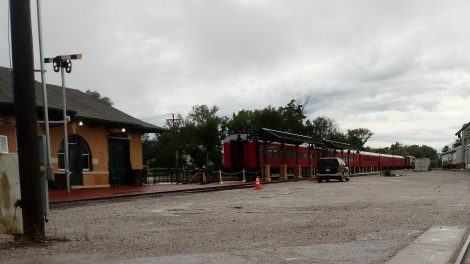 Midland Railway can now carry more than tourists on its 12 miles of line from Baldwin City to Ottawa.

Since its founding in 1987, the Midland Railway Historical Association has provided tourist excursion rides along the old Santa Fe Railroad line from Baldwin City to Ottawa.

That could soon change, said A.J. Stevens, CEO of Midland Railway. The organization earlier this month received an exemption to become a Class C shortline railroad from the federal Surface Transportation Board. With that classification, the railway is now a common carrier that can haul freight and engage in interstate commerce.

Because hauling freight and making money from that activity is outside of Midland Railway Historical Association’s mission as a nonprofit, its board has established the for-profit Baldwin City & Southern Railroad Company, Stevens said. Wholly owned by Midland Railway, the company would be responsible for the management and maintenance of the existing track and the for-profit rolling stock, Stevens said. At the end of each year, any profits realized after payroll and other expenses would be paid as dividends to Midland Railway, its only investor.

As of right now, Baldwin City & Southern has no freight customers, but Stevens said there are possibilities. The Midland Railway tracks cross the property of Martin-Marietta Quarry just north of Ottawa, and the Baldwin Feed Company’s elevator sits on the line in Baldwin City. When the old Santa Fe Railroad’s route from Lawrence to Ottawa was discontinued in the 1970s, the line still hauled considerable agricultural freight in the form of grain from Baldwin City, and fertilizer, seed and feed to the city, Stevens said.

As for future customers, the railroad has started exploring the possibility of a rail-served industrial park, Stevens said. That endeavor has benefited from the consulting expertise of Skip Kalb, a Baldwin High School alumnus who oversaw the development of the Burlington Northern Santa Fe Railroad’s intermodal in Edgerton. Kalb has worked with a number of communities about starting such parks, which add about 150 jobs to the local economy, Stevens said.

There is no room for a rail-served industrial park in Baldwin City, so it would have to be built either north or south of the city limits, Stevens said.

“We are really doing this for the benefit of Baldwin City,” Stevens said. “We are not looking to buy land, but if someone is looking for an alternative to the BNSF intermodal, we are an option.”

The railroad would ask Baldwin City to annex a future industrial park, but not for tax incentives, Stevens said. However, it would explore incentives from the state, and an official from the Kansas Department of Commerce visited Midland Railway last week, he said. Midland officials have also had early discussions with Baldwin City government and the Baldwin City Economic Development Corporation, Stevens said.

Baldwin City Mayor Casey Simoneau, who is also an EDC member, said the Midland Railway developments were encouraging for the community, but there had only been brief preliminary discussions of a rail-served industrial park. He said the city would work with the railway on any requested annexation.

“Anytime a local business wants to grow the tax base and add jobs in the community, it’s important you work with them,” he said.

Editor’s note: This story has been revised to correct the name of Skip Kalb, a Baldwin High School alumnus who oversaw the development of the Burlington Northern Santa Fe Railroad’s intermodal in Edgerton.