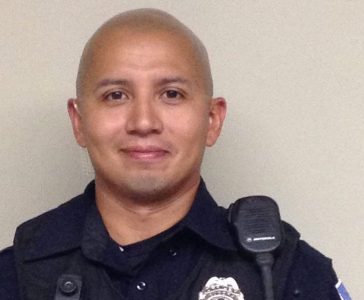 When the city of Eudora and the Eudora school district agreed this spring to jointly fund a second school resource officer, Fred Ramirez had two good reasons to seek the position.

Ramirez, a three-year officer with the Eudora Police Department and a 12-year law enforcement veteran, said the position offered an opportunity to be more involved with the daily activities of his 9-year-old daughter and 13-year-old son.

“I figured once school opened up it would be a good way to get in the schools,” said Ramirez, who stepped away from his career for two years to be a stay-at-home dad. “It works out well with taking them to school and being at their activities.”

Ramirez wasn’t alone in thinking he would be a good fit for the position.

“There were a number of parents who encouraged me to apply,” he said. “I know a lot of kids in the community.”

The Eudora City Commission approved in April an agreement with the Eudora school district that has the city providing 67% of position’s annual cost and the school district funding the remainder. Eudora City Manager Barack Matite said at the time that the city’s share of the annual cost would be from $44,000 to $64,000. The greater city share was justified because the officer, although assigned to a school beat, would have other law enforcement duties.

Eudora Mayor Tim Reazin said the City Commission was responding to the concerns of the community by funding the position. He said the top safety concern parents identified during community meetings the district conducted in spring 2018 was the need for a greater police presence in Eudora schools. Before Ramirez started in his new position in August, Corp. Caleb Lewis balanced his daily SRO schedule at Eudora elementary, middle and high schools.

Ramirez said he completed his required training in St. Louis before the school year started. That training put a big emphasis on establishing relationships and trust with students. He has made a priority of establishing those links, he said.

“I’m spending a lot of time around kids and building relationships with them,” he said. “I know some of them from coaching, but I’m still learning some names.”

The goal is to establish a presence so that students are comfortable coming to him with a problem, Ramirez said. At the same time, he is still a police officer so students have to know he will do his job should they step out of line, he said.

He is also establishing rapport with teachers and school staff so that he can be a resource should they suspect students have criminal concerns in the home or are themselves engaged in questionable activities, he said.

Providing safety is the top priority, and Ramirez said the officers and the schools would drill for worst-case active-shooter scenarios.

“We will be doing that,” he said. “We’re having planning discussions. We will probably be doing that three times a year.”