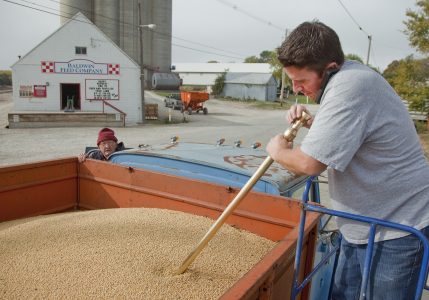 The local fall harvest got into full swing the past 10 days with an extended period of dry weather.

Steve Wilson, owner of Baldwin Feed Company, said local farmers hauling to his elevator have in the last week mostly switched from harvesting corn to soybeans. He estimated that as of Friday, more than half of the soybean crop of southern Douglas County and northern Franklin County remains in the field.

Wilson said he doesn’t have a good sense of the yields that this year’s soybean crop is producing, other than it’s “above average.”

As he unloaded a semitrailer of freshly cut beans at the Baldwin City elevator on Friday, Doug Ferguson concurred with Wilson’s soybean harvest assessment.

“I really haven’t checked the yields,” he said. “I know it’s better than average.”

Ferguson said he was harvesting about 2,000 acres of beans and 300 acres of corn from fields south of Baldwin City.

Weather conditions in the form of heavy spring rains that delayed planting also affected this year’s corn crop, Wilson said. The corn harvested to date was from fields farmers who were able to plant before persistent rains put a hiatus on spring planting. He estimated corn yields to date were from 100 to 150 bushels per acre.

Ferguson said the rains played a role in the wide swing in corn yields.

“The upland fields did well,” he said. “The low-lying fields didn’t do so well because of all the flooding.”

Nonetheless, a final average of 100 to 150 bushels of corn per acre would represent a significant bounce back from last year, when the USDA shows the drought reduced the county’s average yield to 73 bushels per acre. That compared to 75.9 in Franklin County.