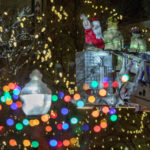 Santa waves to the crowd as firefighters lower him down from the roof of Weaver's Department Store on Friday, Nov. 23, 2018, during the Holiday Lighting Ceremony and Santa Rescue.

The annual Downtown Lawrence Holiday Lighting Ceremony and Santa Rescue that was scheduled for Friday night has been postponed because of rain in the forecast, organizers announced Wednesday.

Downtown Lawrence Inc. Executive Director Sally Zogry said that having the event in the rain wasn’t a safe option because of the lights, sound system and other electronic equipment involved. As of Wednesday morning, the National Weather Service in Topeka predicted a 90 percent chance of rain, including the possibility of thunderstorms, on Friday.

Zogry said the event was rescheduled for Friday, Dec. 6. She said she is working to coordinate with the approximately 20 entities involved with the event, and she hopes the community will plan to make a good showing again this year.

“We hope they’ll come out next week,” Zogry said. “We are doing everything we can to make sure that it happens.”

Zogry said a lot of people looked forward to the local tradition of more than 35 years. Last year’s event attracted a crowd of about 4,000 people, she said.

As the tradition goes, the mayor leads the crowd of onlookers in a countdown before illuminating the downtown holiday lights. Santa’s arrival on the scene hits its usual snag, and Santa finds himself stranded on the rooftop of Weaver’s Department Store, 901 Massachusetts St. Local firefighters are called to the scene, and a fire truck makes its way down Massachusetts Street to bring Santa safely down from the rooftop using a ladder.

“The mayor officially kicks off the holiday season,” Zogry said. “We count down and all the holiday lights on Mass Street come on, and that is when we look up and the spotlight finds Santa on the roof.”

The event kicks off with holiday music by local choirs. Zogry said that the Lawrence High School Chorale, Liberty Memorial Central Middle School Excalibur Choir and the Lawrence Civic Choir are scheduled to sing at this year’s event. Local radio host Hank Booth will be the master of ceremonies.

Once Santa is rescued, kids can wait in line to make a wish, receive a treat and get a photo with him. While people wait, Zogry said the plan is to have members of the Just Us League, a local group that dresses up as superheroes, on hand for entertainment and photos. She said face painting and balloon art will also be available throughout the event from Fairy Fox Design. Ranjbar Orthodontics, the event’s presenting sponsor, will also have a booth with some free prizes.

As before, the event will begin at 5:30 p.m. at the intersection of Ninth and Massachusetts streets in downtown Lawrence. The holiday lights will be turned on at approximately 6:20 p.m. and Santa will arrive at approximately 6:30 p.m.

Now that the Santa Rescue and Holiday Lighting Ceremony has been rescheduled for Dec. 6, it will join other events planned as part of what Downtown Lawrence Inc. is calling Winter Wonder Weekend. Those events include the 27th Annual Lawrence Old-Fashioned Christmas Parade on Dec. 7 and live caroling and “Santa sightings” throughout the weekend.