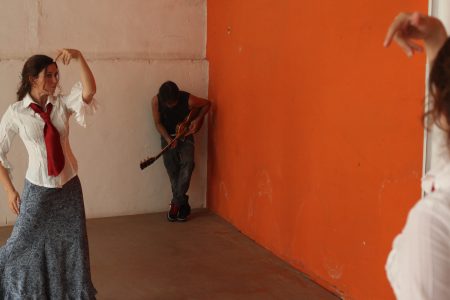 Melinda Hedgecorth and her husband, Antonio Rojas, practice a flamenco performance in Seville, Spain. The pair, along with fellow musicians, will perform in Lawrence on Saturday, Nov. 16, 2019, at the Cider Gallery.

Misconceptions about flamenco dancing abound, Melinda Hedgecorth can attest. Most people these days seem to know it has nothing to do with gangly pink birds, but plenty still think it’s a simpler form of tango or salsa dancing — an assumption that Hedgecorth is eager to clear up.

“It’s nothing like those things,” said Hedgecorth, a Kansas City native who has been studying and performing flamenco for decades. On Saturday, she and her husband, Antonio Rojas, a guitarist and native of Seville, Spain, will give a performance in Lawrence that they describe as a timeline of flamenco from the end of the 19th century to modern times.

“People think it’s a lot simpler than it is,” she said of the art form that originated centuries ago in southern Spain, perhaps because it traditionally involves just one dancer.

But that doesn’t mean it’s a solo performance.

“The partners are the musicians,” Hedgecorth said, explaining that the standard elements of flamenco are a highly integrated ensemble of dancer, guitarist, singer and percussive sounds, such as clapping. The precision footwork, known as zapateado and performed in specially crafted shoes with nails hammered into the toes and heels, is perhaps the most recognizable hallmark of flamenco.

“It’s very technically demanding,” Hedgecorth said, noting that it takes years to master and commonly is passed down through families. “The technique is quite difficult, and if you don’t start young, it is very difficult to get good at it.”

Hedgecorth began studying flamenco in the early 1990s at the University of Missouri in Kansas City. She wouldn’t get to Spain until a few years after that, but when she did it was a “game changer,” she said.

“I think it’s hard for younger people to imagine, but we didn’t have YouTube or the internet, so to study a music or dance form from another country you really depended a lot on the people around you to sort of define what that was,” she said. “You weren’t able to see it in action by people who grew up doing it.”

When she did see it in action, she realized that she “hadn’t even started to get into the depths of it.” 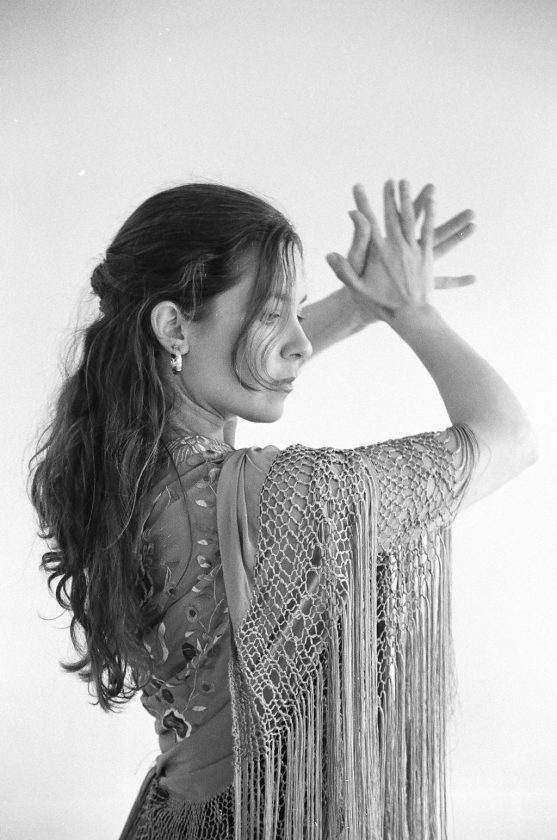 That first trip was three months of total immersion in the art form.

“I stayed and I danced. I took like five classes a day every day,” she said. “I ate vegetable sandwiches so that I could save all my money for flamenco.”

She subsequently went to Spain for several months every year, and in the early 2000s she lucked out: “I was offered a work visa,” she said, “which was very difficult for an American.”

“And when that happened, I said, ‘Well, I should take advantage of this because this isn’t going to happen every day.’ And I did, and I ended up staying 14 years.”

As one might imagine, it wasn’t easy for a Midwesterner to gain entry into the quintessentially Spanish world of flamenco.

“There are very few foreigners and even fewer Americans who are able to make some sort of living or get some sort of recognition for their art form in flamenco,” she said.

But Hedgecorth was determined. She was able to perform in some smaller venues in Seville, where she met her husband, and got accepted into some peñas, which are traditional clubs run by flamenco aficionados. Eventually she was able to study intensely with Israel Galván, who later became a renowned flamenco dancer and choreographer.

Hedgecorth will perform one of Galván’s pieces on Saturday. Although he’s very popular now, that wasn’t always the case. She says he was looked down on initially for the “innovative ways he moved,” but she credits him and other artists for demonstrating that flamenco, for its revered place in Spanish history, is “not a stagnant art form.”

The dynamism of the dance is something she hopes to convey in Saturday’s performance, during which she’ll move through a timeline from the 1800s to today, including the influence of other countries, particularly Cuba, on flamenco, as well as the dance renaissance that occurred after the Spanish dictator Francisco Franco died in 1975. One of the final pieces in the show will be what she calls a “flamenco-rock fusion” featuring an electric guitar.

Last year, Hedgecorth and her husband moved from Spain to the Kansas City area, where, in addition to performing, she has been heavily involved in teaching flamenco, including offering classes in Lawrence, where her students have ranged in age “from 3-year-olds to 70-year-olds.”

She notes that flamenco dancers perform until very late in life and frequently become more interesting — “seasoned,” she calls it — with age because the art form involves “the whole range of emotions.”

Saturday’s performance will take place from 6 to 8 p.m. at the Cider Gallery, 810 Pennsylvania St. Wine will be available for purchase. Following the performance, discussion and light tapas will be available. Tickets are available for $20 online (go to https://www.45gradosflamenco.com/event-info/origenes) or $25 at the door. Children enter free with an adult, but a ticket is still required.