The road to Woodstock: 2 Lawrence residents remember the trip half a century later 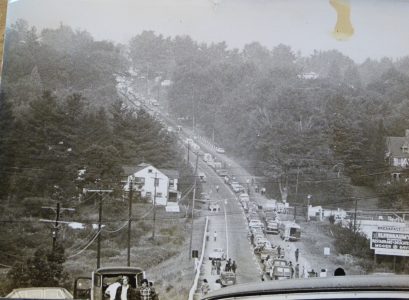 A photo taken by Steve Lopes shows a long line of traffic heading to the Woodstock Music & Art Fair on Aug. 15, 1969.

The way Woodstock was pitched by organizers was very different from what two Lawrence residents experienced when they went in search of “peace and music” 50 years ago.

Steve Lopes and Frank “Lingo” Kelly were among the masses who flocked to an alfalfa field in Bethel, N.Y., for the Woodstock Music & Art Fair.

From the festival flyer, Lopes imagined he was heading to an open space with plenty of room to pitch his tent. 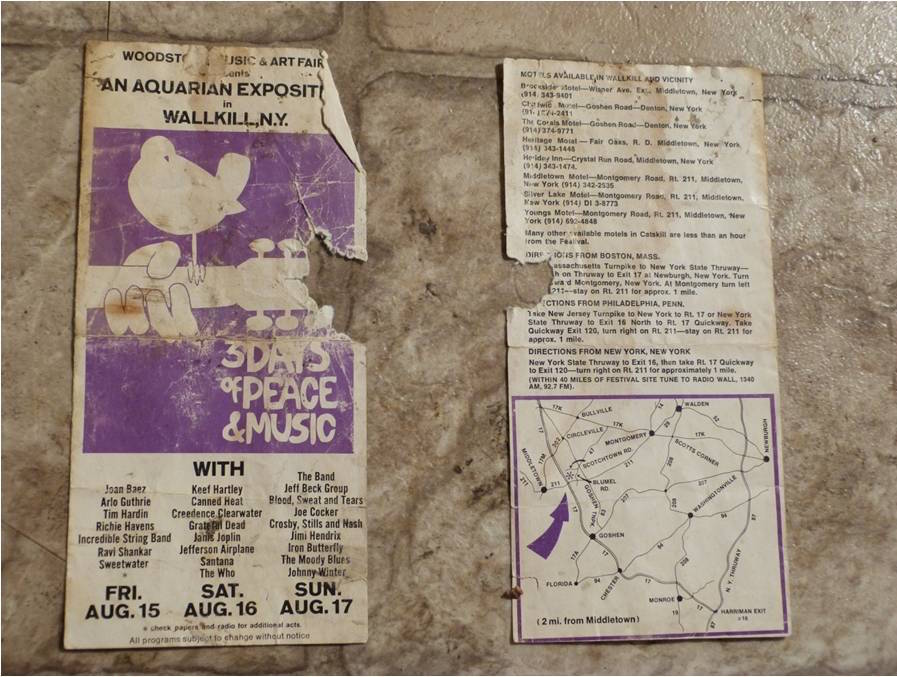 Steve Lopes saved his flyer from 50 years ago when he attended the Woodstock Music & Art Fair on Aug. 15, 1969. The flyer lists all the bands that were scheduled to perform.

“I thought we would take in the arts and crafts festival while listening to great music playing in the background,” Lopes said. What he didn’t know was that organizers had sold 186,000 tickets for the four-day event — and an estimated 400,000 people would actually show up for the festival.

While Lopes and Kelly both now live in Lawrence, the two didn’t go to the festival together. They were different ages and lived in different states at the time. Plus, their experiences from that weekend were poles apart.

Lopes, a retired union organizer for the Kansas National Education Association, has recently taught a course called “Woodstock at 50” through the University of Kansas’ Osher Lifelong Learning Institute. 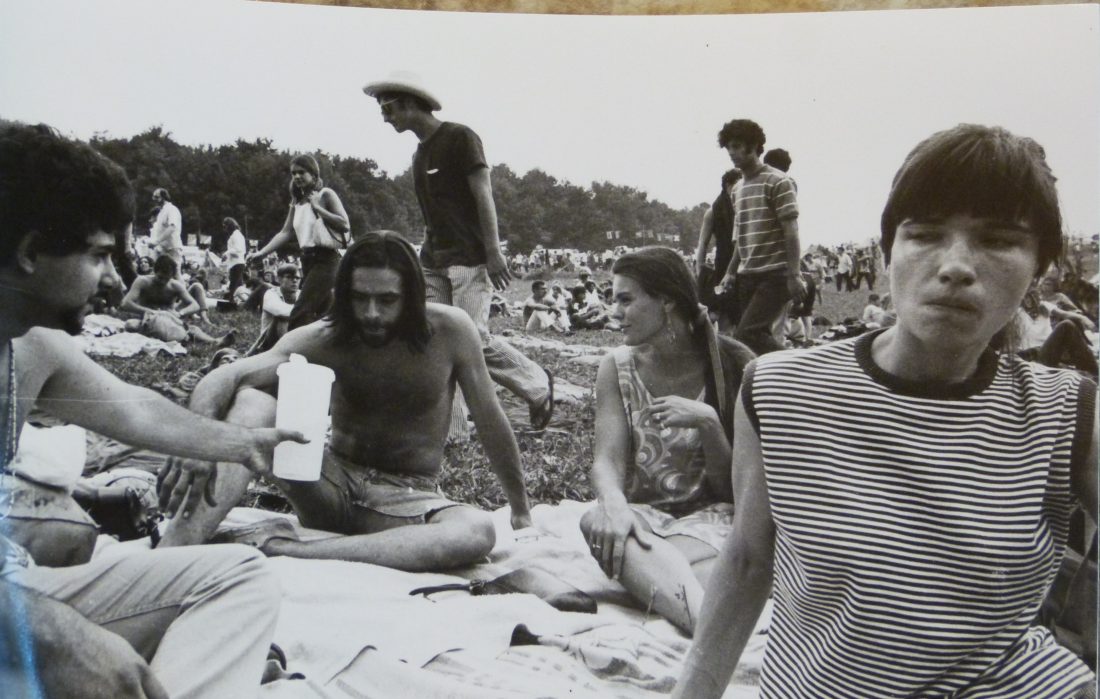 Back on Aug. 15, 1969, he was 25, a college administrator in Boston and a husband and father. He planned the trip well in advance, sending off early for tickets, which cost him $6 for each day. He was excited to hear some of the greatest musicians of the time: Joan Baez, the Grateful Dead, Janis Joplin, Jimi Hendrix.

Lopes and his wife left the kids with grandparents and traveled with two friends in Lopes’ 1965 Volkswagen Microbus. It was packed tight with camping gear, food and water. But there was still room to squeeze in a hitchhiker they met along the way.

Reality hit about 6 a.m. Friday when they became stuck in a major traffic jam with hundreds of thousands of like-minded people heading to the same event. 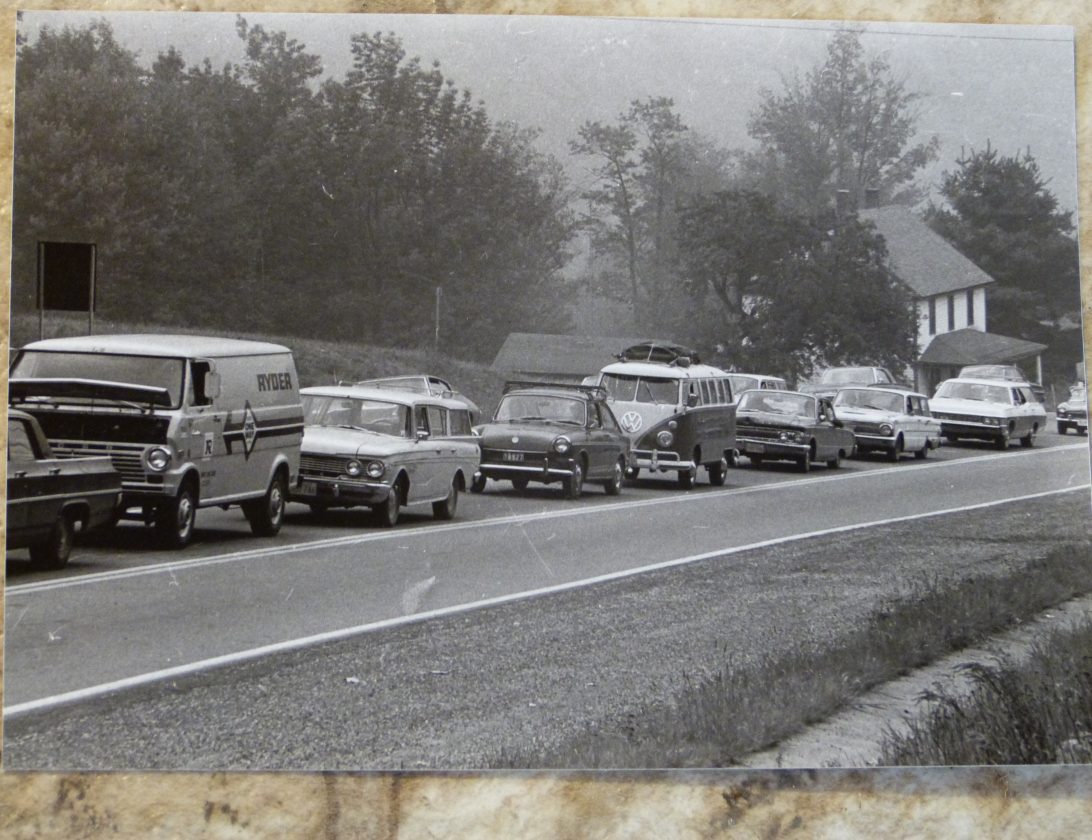 Steve Lopes’ 1965 Volkswagen Microbus is shown stuck in traffic on Aug. 15, 1969, on the way to Woodstock. Traffic was at a standstill, allowing Lopes to get out of the vehicle and take a picture.

With traffic at a standstill, people left vehicles on the side of the road and walked the rest of the way to the festival. A photo Lopes took shows the Volkswagen bus stuck in a line of traffic.

“About 9 a.m. we decided to walk. We parked the van and had backpacks and food. We were well prepared,” Lopes said. It took hours. He estimates they walked about 15 miles.

The first act, Richie Havens, wouldn’t begin playing until shortly after 5 p.m., but the masses of people were arriving. Some festival-goers had already been camped out for several days, Lopes said.

They found a spot and spread out blankets. Organizers were still building the scaffolding for the stage.

“Hammers and saws were the only music we heard all afternoon,” he said. “We hung out. We got to know our neighbors — a diverse, but a strangely familiar bunch. We bonded around drugs, love of music and being in the country on a nice day.”

Joan Baez, six months pregnant, closed out the evening’s concert about 2 a.m. The crowds had continued to grow, and Lopes said it was becoming difficult to be there. Just going to the toilet was a problem because it was a challenge finding friends again in the sea of people.

“We didn’t have any mobility,” he said. So after Baez played, they decided to leave, which meant a three-hour hike back to the microbus.

“Here we were stoned out of our gourds trying to find our car,” Lopes said. They eventually did find it and drove to a campground, where they finally got some sleep and never took in any more of the festival.

“It would have been impossible to go back,” Lopes said. 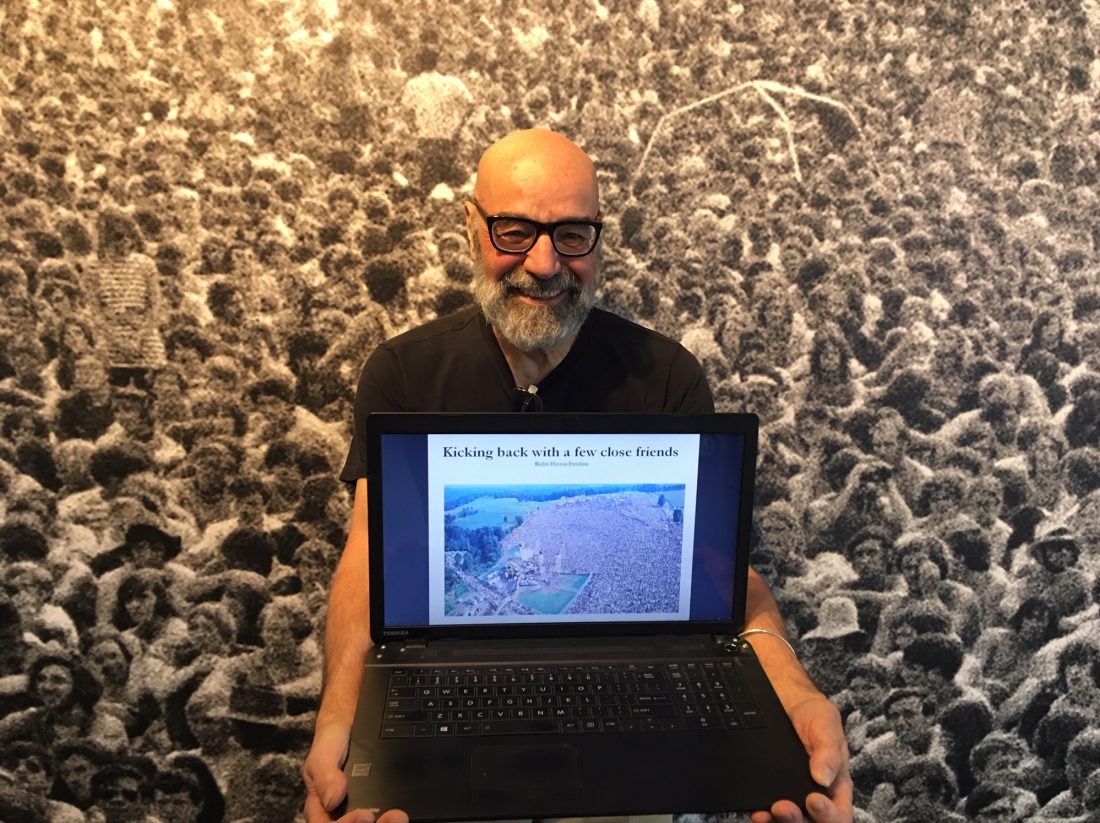 Steve Lopes, who attended Woodstock 50 years ago when he was 25, teaches a course on Woodstock for KU’s Osher Lifelong Learning Institute. He is standing in front of a mural from the music festival that’s on display at the Lawrence Arts Center on Aug. 8, 2019.

Frank “Lingo” Kelly was 18 back in August 1969. He had just graduated from high school and was waiting to head off to college. After hearing Walter Cronkite mention on the evening news an event overrun with people closing down the New York State Freeway, Kelly impulsively decided he was going to Woodstock.

It didn’t matter that Woodstock was a five-hour drive away from his home in the suburbs of Washington, D.C., or that he didn’t have tickets or transportation. He talked his best friend into going with him, and they left home that night.

“I figured we would get in,” Kelly said.

With only a sleeping bag and some money, they hitchhiked. Outside of Washington, they were picked up by two guys in a Mustang headed to Woodstock.

In retrospect, Kelly, who is a writer today, knows he was ill-prepared to spend the weekend. He had no water or food. Unlike Lopes, he didn’t bring a camera. 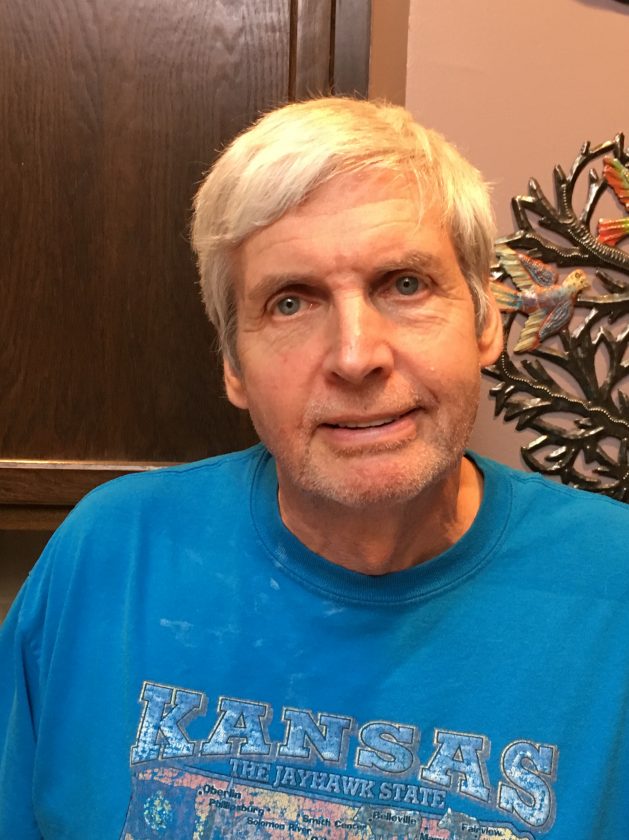 Frank “Lingo” Kelly, of Lawrence, was 18 back in August 1969, when he hitchhiked to the Woodstock Music & Art Fair in Bethel, N.Y.

Their ride got within 20 miles of the festival; they walked the rest of the way. Along the way Kelly found someone selling tickets for $5.

“Little did I know it had been declared a free festival,” Kelly said.

The music was the highlight for Kelly, who remembers watching “Johnny Winter on his blistering guitar and Canned Heat’s bluesy rock.”

Waking Monday morning, hungover, wet and muddy from all the rain, he thought the festival was over. But he could hear Jimi Hendrix playing from the stage about a half-mile away. He walked back and was glad he did, because Hendrix would die a year later.

For Kelly, Woodstock was serendipitous.

“Most people there had good intentions: to enjoy music, get high and have fun,” he said.

He saw it as an oasis in a time of turmoil.

“The Vietnam War was in full force. Nixon’s feds and many states were cracking down on drugs,” Kelly said. “So to have a weekend where people gathered for peace and music — with highly inadequate facilities but nobody fighting and few, if any, drug busts — was a tremendously cool accomplishment.”

Woodstock also made an impact on Lopes’ life. A month afterward, he quit his job as an administrator and became a public school teacher.

“The community we experienced at Woodstock made me understand how vital it is to care for each other,” Lopes said.