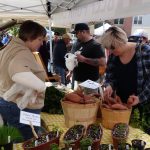 In this file photo from April 2017, Stephanie Godinez buys sweet potatoes from Cathy Jo Simpson at the Jett Produce booth at the Lawrence Downtown Farmers' Market.

The Lawrence Farmers’ Market will open its 43rd season Saturday with familiar vendors and some new faces selling a variety of products, from locally produced meat to vegan cinnamon buns.

While it’s still early for a lot of fresh produce, plenty of greens will be available, according to Brian McInerney, the market manager.

For those starting gardens, young vegetable plants will be available, along with expert advice on how to grow them.

“A lot of the vendors have good relationships with the community, and they will introduce new things to see the responses from people,” McInerney said.

Returning for a second year will be the Black Squirrel Bake Shop, which sells vegan products.

“We will have cakes, cupcakes, cinnamon rolls, whatever we are feeling,” said Alyssa Rice, owner of the business.

Known for the lavender flavor in her baked goods, she plans to introduce a new lemon offering on Saturday. While she takes orders year round, what she enjoys about the market is interacting with customers and seeing their reactions when they taste her food.

The market will even have something for dogs, McInerney said. A new vendor will be exclusively selling organic dog treats.

Again, this year, the market will offer its token program, in which shoppers can purchase $5 tokens that can be used throughout the market season.

“A lot of vendors don’t take credit cards,” McInerney said. Tokens can be purchased at the information booth, under the yellow canopy in the west lot of the market.

Also at the information booth, shoppers using SNAP cards can once again swipe the card and receive tokens. Every dollar will be matched up to $25 per day by the market, which is a member of “Double Up Food Bucks,” an initiative to ensure that families get local, fresh food, McInerney said.

The personal experience of people meeting the people who produce their food is what’s so important about the market for McInerney.

“All of the vendors who take the time to strike up conversations not only want to grow the best food, but they want to meet the people they are selling to,” he said.