The vacant Douglas County building located at 1242 Massachusetts St, is pictured on Monday, Feb. 17, 2020. The building has been unoccupied since Douglas County Public Works moved into its new headquarters in 2015.

The Douglas County Commission has abandoned its plan to demolish an unoccupied county building near downtown Lawrence, but commissioners were not happy about how those plans came to be quashed.

During their meeting Wednesday, the commissioners retracted the county’s application to the City of Lawrence for a certificate of appropriateness to demolish the building located at 1242 Massachusetts St. They chose to retract the plans because city planning and development staff recently switched its recommendation for the plans from an approval to a denial after a resident pointed out the plans appear to go against city codes.

The commissioners all expressed frustration that the information about the codes was not clear until after the county had already put years of work and taxpayer money into the project.

“We’ve spent a lot of hours, energy, thoughts and planning,” Commission Chair Patrick Kelly said. “When we don’t get the best advice or we miss the important pieces of information, that’s frustrating.” 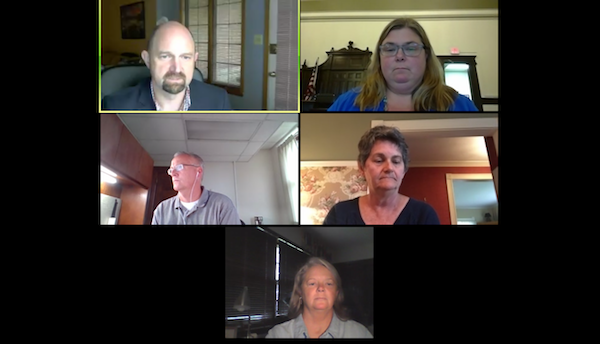 The facility previously housed the county’s public works department until 2015, when the department moved to its current location at 3755 E. 25th St. As the Journal-World previously reported, the county originally planned to demolish the unoccupied building because it has significant structural issues.

But that changed after a resident expressed concern about the plan because of the site’s potential historic value, according to a memo to the commissioners. After a review, the state’s historic preservation office found that the facility, which was originally a church, could be eligible for the state or federal register of historic places.

Additionally, the resident pointed to the city’s landmark codes, specifically ordinance No. 7232, which appears to show the location of the county’s facility is protected. The city’s planning staff then changed its stance on the county’s plan to a recommendation of denial, according to the memo.

Commissioner Nancy Thellman said her frustration is a result of planning staff’s “lack of knowledge or memory of the ordinances” that apply to the building, while Commissioner Michelle Derusseau said it felt like the change “came out of nowhere.”

In the future, Thellman said the county may need to work on building bridges with the preservation community and the Historic Resources Commission to make it clear that the county cares about historic places.

In the meantime, County Administrator Sarah Plinsky said county staff is reviewing its options on how to move forward with plans for the facility, whether that means finding a use for the facility or finding a group that would be interested in restoring it.

In other business, the commissioners approved a new funding program that will allow community organizations — such as Bert Nash Community Mental Health Center and DCCCA — to pay for the use of hotels to quarantine homeless individuals during the coronavirus pandemic.

The plan is a joint city-county effort. Plinsky said the county will pay up to $80,000 over the next four months for the program, and the city will then reimburse the county half of those costs.