Douglas County has filed plans to demolish its building located at 1242 Massachusetts St, pictured here on Monday, Feb. 17, 2020. The building has been unoccupied since Douglas County Public Works moved into its new headquarters in 2015.

Douglas County has filed plans to demolish an unoccupied building on the southern edge of downtown.

The City of Lawrence’s Historic Resources Commission will consider authorizing a certificate of appropriateness for the county to demolish the structure located at 1242 Massachusetts St. during its meeting on Thursday.

The commission will consider the plans for the site because it is near Lawrence’s South Park and the John N. Roberts House, 1307 Massachusetts St. The house, which is also known as the Castle Tea Room, is listed on the National Register of Historic Places.

According to a memo provided to the commission, the county applied to demolish the building and leave the lot vacant as green space. However, the parking lot on the property would remain. Planning staff recommended that the commission should issue the certificate and find that the proposed project will not significantly encroach on, damage or destroy the landmarks.

The county previously used the facility to house its public works department, but the building has been unoccupied since the department moved into its current facility, located at 3755 E. 25th Street, in 2015. County Administrator Sarah Plinsky told the Journal-World in October that the county planned to demolish the building because it has significant structural issues and is no longer compliant with the Americans with Disabilities Act.

The facility, which was originally a church, was constructed in stages between 1948 and 1990, according to the memo. But Apex Engineers, which provided a structural assessment of the facility, found evidence on the site that showed it may have been constructed as early as 1923. 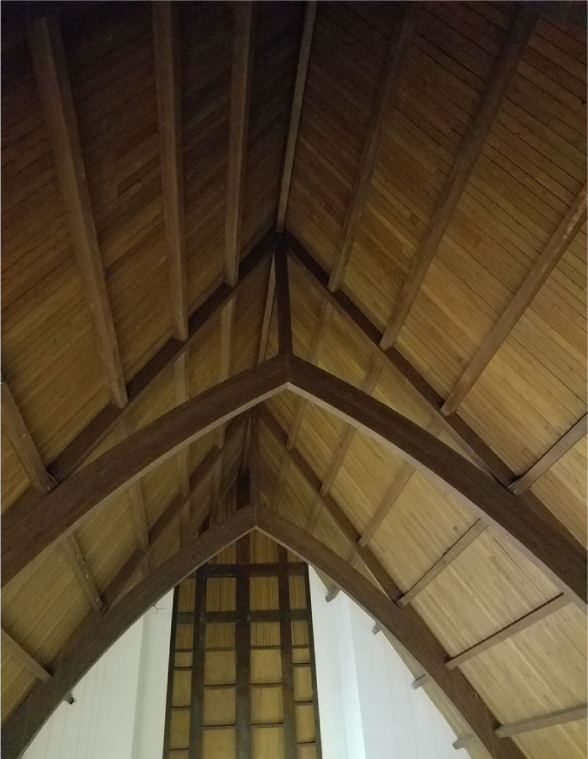 photo by: Apex Engineers/City of Lawrence

This photo from a structural assessment shows the interior of the former Douglas County public works building at 1242 Massachusetts St. The structure, which was originally a church, was constructed in stages between 1948 and 1990, according to city staff.

The main structure of the facility is a single-story masonry building with an A-frame-style roof, which was originally used for religious assembly. It also includes an addition, which was used as office space, of a wood-frame two-story building with a primary entrance facing Massachusetts Street.

The structural assessment of the facility found “danger” from some instability in the building’s foundation, according to the memo. The assessment also found that a “minimal” approach to stabilize the foundation and perform other repairs would be “challenging and costly.”

Mar Lan Construction, which reviewed the probable cost of such a project, estimated renovating the facility would cost about $1.7 million, according to documents provided with the memo. It also estimated building a new facility of similar size and quality would cost about $1.93 million, about 12% higher than the estimated renovation, but it would have a lifespan two or three times longer.

Although the county plans to demolish the building, it did not outline any specific building plans for the site. If the county chooses to build a new structure on the property in the future, it would need to acquire another certificate of appropriateness from the commission, according to the memo.