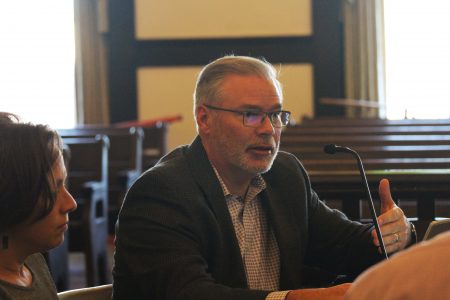 Mike Brouwer, criminal justice coordinator for Douglas County, speaks to the Douglas County Commission during a meeting on Wednesday, Dec. 11, 2019.

However, a work group formed by the county’s Criminal Justice Coordinating Council doesn’t yet know what that might look like, and officials said they might even have to develop a training program from scratch to meet the county’s needs.

“This is brand new on the radar, just something we want to look at,” said Mike Brouwer, Douglas County’s criminal justice coordinator. “We don’t know yet what we’re doing; we just know we want to do something.”

Implicit bias, or an unconscious habit of attributing stereotypes or attitudes toward people of certain social groups, isn’t a new topic for the CJCC. One former member, the Rev. Edith Guffey, recently called on the council to focus more on race and ethnicity issues.

“Sometimes people are unaware of their own biases and will deny they even have them so implicit bias training is certainly an important first step,” Guffey said in an email to the Journal-World. Even though her term on the council itself ended in January, she is still helping with the work group that is researching implicit bias training.

But Brouwer said it may be difficult for the CJCC to find the kind of training program it wants. He said a preliminary search for implicit bias training programs came up with some that were made specifically for police forces, but not many for other areas, such as training for jail staff, parole officers and other parts of the criminal justice system.

If the CJCC’s work group dedicated to race and ethnicity issues cannot find a suitable program, it may have to look for ways to develop its own training, he said.

Brouwer recently told the Douglas County Commission about the work group’s plans during a work session. He told the Journal-World last week that the work group met for the first time on Monday.

“We’ll be looking at some opportunities for training (for) our key decision makers and our justice system and those who are providing supervision around racial and ethnic disparities,” Brouwer said during a Douglas County Commission meeting in early February.

The ultimate goal is to provide training to staff members at “every point of contact” within the criminal justice system, Brouwer told the Journal-World.

“I don’t know if that exists, but that would be the ideal (program),” he said.

Brouwer mentioned the plans to the commissioners shortly after Guffey wrote a letter to the CJCC in January calling for more focus on the issue of race in criminal justice.

In the county’s most recent jail statistics, released Feb. 28, 23% of inmates were African American. By comparison, about 4.7% of Douglas County’s population is African American, according to U.S. Census statistics.

“It doesn’t just happen,” Guffey said in January, referring to how race affects the treatment of people in the legal system. “It’s a deeper systemic issue that impacts society and manifests itself in the criminal justice system. And no one is asking the deeper questions about why.”

However, Brouwer said the idea to pursue implicit bias training is not new. He said he and Guffey actually discussed the topic of training in the fall after he took over the coordinator position. The conversation focused on some of the projects the CJCC was conducting related to race and ethnicity, including the law enforcement contact study that began collecting data in January. Brouwer said with that program in place, he wanted to ask Guffey what the council could do next.

“She said, ‘Just start with training and raising awareness,'” Brouwer said at the commission meeting. “I thought, ‘That is so simple. How come we haven’t done that?'”

Guffey acknowledged the training is not directly related to her comments in January. But she believes it could still help bring up the conversation of systemic racial bias within the justice system.

“It’s all so complicated and interrelated, that’s what makes it systemic; it’s part of the air we breathe, like it or not,” she said.

If the work group is unable to find implicit bias training that covers all areas in the criminal justice system, Brouwer said he may turn to outside organizations that focus on race to help find programs or develop new training.

Brouwer said work within the CJCC sometimes takes a while to complete. But he said he hopes the work group can identify some options to share with the commissioners later this year.

Guffey agreed that it sometimes takes a while to make change on race and ethnicity issues. But she said she was happy that the CJCC was doing that work.

“I always say that any work related to race is a journey (and) not a sprint,” she said. “But I appreciate the intentionality of those that were around the table (last week).”