Pam Weigand, Douglas County's director of criminal justice services and chair of the Criminal Justice Coordinating Council, speaks to CJCC members from behind the lectern during the council's meeting on Tuesday, June 11, 2019 at the Douglas County Fairgrounds.

An outgoing member of the Douglas County Criminal Justice Coordinating Council believes more needs to be done to address the issue of race in the local justice system.

Crafting a comprehensive plan to address such issues would be a good place to start, said the Rev. Edith Guffey.

“It doesn’t just happen,” Guffey told the Journal-World, referring to how race affects the treatment of people in the legal system. “It’s a deeper systemic issue that impacts society and manifests itself in the criminal justice system. And no one is asking the deeper questions about why.”

Local leaders have previously said that racial disparities in Douglas County include disproportionate minority contact with the criminal justice system, including African American residents being jailed in disproportionate numbers.

However, the council is pursuing some programs that are focused on the issue of race and ethnicity in criminal justice. But whether that is enough is Guffey’s concern; she says the issue has “received the least attention or at least seen the least amount of progress by the CJCC.” 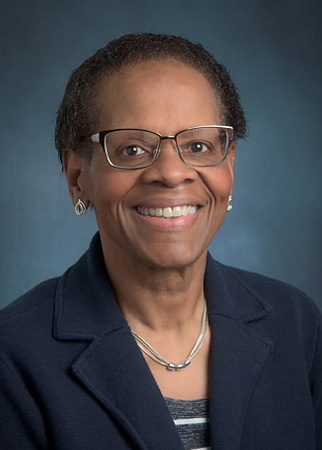 Guffey, whose term on the council ends at the end of the month, shared a letter outlining those concerns with her colleagues on the council during her final meeting on Jan. 14. In the letter, Guffey said that she was proud of the work the council has conducted in the four years she has served, which began when the council was formed in 2016, and that she remained supportive of its goals.

But she also said she feared that the council was dominated by “insiders,” or people who work within the justice system, and that it did not have enough outside perspectives.

Guffey said she also thought the council had not been able to effectively talk about race. She told the council members during the meeting that she didn’t know what the council needed to do to push through that barrier, but she asked members to commit to figuring it out.

“There is no way any organization that is going to ask about criminal justice today can’t learn to talk about race,” she said. “Otherwise we are never, ever going to be able to do our job.”

During her four years on the council, Guffey said the only initiative she was aware of that aimed to address racial disparities was a contact study that was expected to begin collecting data this month. The joint Douglas County-City of Lawrence study will research the racial breakdown of law enforcement contact for traffic and pedestrian stops.

As the Journal-World previously reported, the study comes in part because African Americans are disproportionately represented in the population of the Douglas County Jail. There is also “disproportionate minority contact with the criminal justice system,” Robert Bieniecki, the county’s former criminal justice coordinator, said in January 2019.

But other than that, there hasn’t been much talk about the systemic issues that contribute to racial disparities, Guffey said.

“That has been the piece we have not really addressed,” she said during the meeting. “There is an urgency. People’s lives are impacted because of these policies.”

The other council members did not respond to Guffey’s comments or her letter during the meeting. In a statement emailed to the Journal-World, current Criminal Justice Coordinator Mike Brouwer said the council thanked Guffey for her work and has acknowledged her comments. Although Guffey will no longer serve on the council itself, she is listed to serve on one of the council’s work groups that is dedicated to researching racial and ethnic disparities.

“We are glad she will continue the work by serving on a CJCC work group,” Brouwer said in the email. “We acknowledge that we have a lot of work to do and appreciate her comments and feedback.”

At the same meeting, prior to Guffey’s comments, Brouwer announced that Douglas County was recently selected to participate in the County Justice Peer Learning Network that is offered by the National Association of Counties. The program begins this month and lasts until June 2021.

The program, which is supported by the John D. and Catherine T. MacArthur Foundation, will help the county implement a policy or program that aims to reduce the number or individuals with mental illness in its jail while addressing racial and ethnic disparities within its criminal justice system, according to the news release.

Of the opportunities offered through the program, one is allowing the county to learn about the intersection of mental health and racial and ethnic disparities for individuals who are charged with a crime, or put in jail, or on supervision ordered by the court.

“We are really excited to receive technical assistance from the MacArthur Foundation’s Safety and Justice Challenge team for addressing racial and ethnic disparities in our criminal justice system,” Brouwer said in the news release.

Additionally, in the council’s overall strategic plan, which is scheduled to run until 2022, the second goal for the council is “addressing disproportionate minority contact.” The steps listed to achieve this goal include the contact study, training on implicit biases in criminal justice and collecting data related to race in criminal justice.

But when asked about these initiatives, Guffey suggested they weren’t enough.

“My question would be ‘what is the comprehensive plan?'” Guffey told the Journal-World. “I don’t think there is one.”

With Guffey leaving the council, she said someone needed to step up to be a champion for addressing racial inequality. She used the progress the council has made on addressing mental health factors in criminal justice as an example of what could happen with such a leader.

Bob Tryanski, the county’s director of behavioral health projects and a member of the council, has successfully pushed for progress on mental health, she said. In November, the council received several recommendations — some of which were already underway — to help keep people with mental health issues from repeatedly ending up in jail.

Guffey said she’s thankful the council made mental health a priority, but she believes race needs to be one too.

Although she won’t be on the council, Guffey told her colleagues she would continue to voice her concerns about racial disparities.