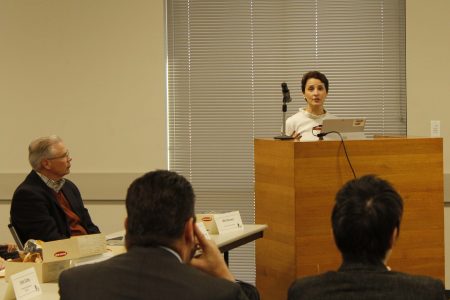 Risë Haneberg, a representative for the Council of State Governments Justice Center, presents recommendations to the Douglas County Criminal Justice Coordinating Council to help reduce the number of people with mental illnesses being booked into jail, during the council's meeting on Tuesday, Nov. 12, 2019.

And some of those steps are already underway and could have an immediate effect.

“A lot of these things have already been implemented,” said Kati Habert, who presented a set of recommendations on the issue to the Douglas County Criminal Justice Coordinating Council on Tuesday. “When looking at your 2019 (reports), I predict you will see a difference based on all of the things you’ve implemented in the last year.”

Habert and Risë Haneberg, representatives for the Council of State Governments Justice Center, presented the recommendations as part of the council’s participation in the Stepping Up program, which aims to reduce the number of people with mental illness being booked into jail.

The most common charge that causes people with serious mental illness to be booked into the Douglas County Jail is failure to appear in court, Habert said. Often, the original charges for those court appearances are not “jailable” offenses.

Charles Branson, Douglas County’s district attorney, said the district court began using robocalls and text messaging services about a year ago to remind people of their court dates. He said that with almost a year of service completed, the district court will now need to reevaluate the program and gauge its effectiveness.

Another recommendation the district court has already begun implementing includes the creation of a pretrial risk screening tool. While the tool is generally used to evaluate the likelihood a defendant will appear in court for future hearings, additional screenings can be conducted to identify if defendants may need mental health services, which the court can connect them to, said Mike Brouwer, Douglas County’s criminal justice coordinator.

“The goal is to make sure they have support to remove barriers to court appearances and stabilize in the community so they don’t return to jail,” Brouwer said. “That lowers the number of people with (mental illness) being booked into jail.”

However, Haneberg recommended getting the tool validated by a third party to ensure it is working correctly.

To make sure people with mental illness receive treatment once released from jail, which may help reduce recidivism, Haneberg recommended creating a communication process between the jail and mental health service organizations to inform them of the release of a person in need. She also recommended the council consider exploring a transportation service that makes sure those released from jail are able to get to those services.

While the Douglas County community hasn’t yet created such a transportation service, Jill Jolicoeur, assistant county administrator, said the council was keeping an eye on a ride-sharing service that other counties around the country are experimenting with. She said Douglas County has reached out to the company that provides the service and is working on creating its own pilot program.

Additionally, Jolicoeur said such a service may also be used to help people with mental illnesses get to their court appearances.

Other recommendations for the council include creating a mobile crisis response team that would help provide immediate mental health services to residents in need and hiring a mental health care coordinator for the district court and the jail, among many others.

County Administrator Sarah Plinsky noted that funds from the quarter-cent sales tax for behavioral health, which Douglas County voters approved in the 2018 election, could be used toward those efforts.

Patrick Schmitz, CEO of Bert Nash Community Mental Health Center, said those recommendations were timely because of the county’s ongoing project to build a behavioral health crisis center on the Treatment and Recovery Campus of Douglas County. Additionally, he said Bert Nash and other organizations have been looking into creating a mobile crisis response team.

“We’re really at a position now to take your recommendation and move it forward,” Schmitz said.