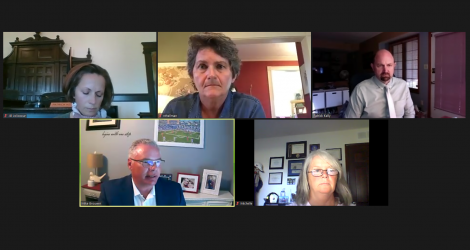 Douglas County Criminal Justice Coordinator Mike Brouwer, bottom left, speaks to the County Commission during its meeting on Wednesday, June 24, 2020. Brouwer provided an update to the commissioners about the work criminal justice leaders are doing to help reduce the amount of people who are booked in the county jail.

During the County Commission meeting on Wednesday, Brouwer reported to the commissioners some steps the Lawrence Municipal Court and the Douglas County District Court are taking to help reduce the number of people the court systems put in jail. The steps are in response to the commissioners recently calling for all users of the jail, including the court system, to find new ways to reduce the amount of people they place there as the jail faces an inmate population crisis during the coronavirus pandemic.

The jail is facing a crisis because the facility’s capacity has effectively shrunk. Jail leaders have rearranged the facility’s configuration to help make sure inmates do not contract COVID-19, and the county expects jail bookings to increase as the state continues to reopen from stay-at-home orders imposed during the pandemic.

Some steps the courts are taking include improving notification systems to remind individuals when they have court appearances and increasing the use of video conferencing court appearances for lower-level hearings, both of which could help decrease the amount of jail bookings for failure to appear, Brouwer said.

“Almost everything you’ve heard tonight is all about improving efficiency and case flow, which we think is the primary need for our district and municipal courts,” Brouwer said.

Brouwer also said a work group is exploring a possible recommendation for the creation of a public defender’s office, which could also help increase the court’s efficiency in processing cases.

Brouwer said he will continue to meet with criminal justice leaders to discuss more ways to reduce the inmate population in the jail and report those efforts to the commissioners.

During the discussion on the jail, the commissioners opened a public comment period to hear from two speakers who demanded more to be done to address racial inequality in the local justice system.

Washington, a Black man, has been in custody since 2015. He is charged with first-degree murder and aggravated burglary in connection with the Nov. 7, 2014, death of 19-year-old Justina Altamirano Mosso. His first trial in 2019 ended with a hung jury.