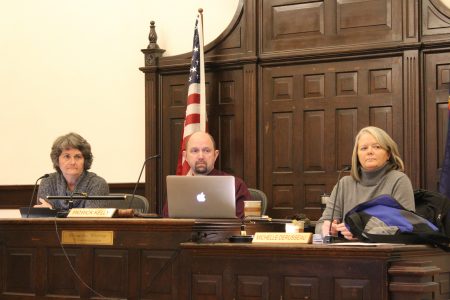 The Douglas County Commission took its final action on the 2019 budget during its meeting on Wednesday by approving $2.7 million of year-end transfers.

The commission began the year-end budgeting process in December when it approved an amended 2019 budget, which allowed the county to account for excess revenue it received throughout that year.

County Administrator Sarah Plinsky told the commissioners Wednesday the year-end transfers are a standard procedure for the county.

“If there are additional funds that come in — either revenues come in more than expected or expenditures are below what we budget for — we can use those in different manners,” she said.

With the increased revenue, the county had about $3.3 million more available in its general fund than what it had planned for in the summer of 2018, when the commission crafted the 2019 budget.

When the commission approved the amended budget in December, it also provided the authority to transfer up to $3.03 million from the general fund to other accounts. But Plinsky told the Journal-World Tuesday that the county proposes using a majority of the authority and letting the remainder go.

“We’re going to leave the budget authority on the table,” she said Tuesday. “We’re just not using that.”

The approved $2.7 million worth of year-end transfers include:

• A $2 million transfer to the capital improvement fund.

• A $265,750 transfer to the capital improvement fund to finance a portion of Douglas County Jail’s security system upgrade.

• A $221,670 transfer from public works to the special highway fund for 2019 projects that are in progress.

In other business, the commissioners appointed Darren Canady to the Douglas County Criminal Justice Coordinating Council.

Canady, who will serve as Commision Chair Patrick Kelly’s appointment to the 23-member council, is an associate professor for the University of Kansas’ English department. He replaces Edith Guffey, who recently finished her second term on the council.

“He has taken a real interest in our criminal justice,” Kelly said of Canady, noting he has attended recent CJCC meetings. “I’m really excited to appoint him.”