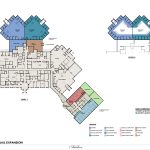 Douglas County commissioners at their Wednesday meeting will consider bids for construction managers at risk for two projects: an expansion of the Douglas County Jail, and housing components of the behavioral health campus.

Commissioners Michelle Derusseau and Nancy Thellman have long supported an expansion of the jail, citing poor conditions for inmates, overcrowding and the need to house inmates in other counties’ jails as primary concerns.

Opponents, however, have generally pushed for more alternatives to incarceration before the county permanently expands the jail’s footprint, especially if the expansion were to be funded through methods that don’t require a public vote.

After county voters turned down a ballot question in May 2018 which, in part, would have created a sales tax to fund a $44 million expansion of the jail, the commission began to look for other options. The result is a new design proposal from Treanor Architects for an estimated $23 million to $25 million expansion that would add between 84 and 112 beds to the jail’s current 186. It could also include a separate minimum security wing for 42 inmates who are involved in reentry and work release programming.

The commission voted in February to use the construction manager at risk method, or CMR, instead of the traditional design-bid-build method, for both the jail expansion and planned housing for the behavioral health campus, which will be constructed at Second and Maine streets along with a crisis intervention center.

With the CMR method, the county contracts with one construction manager who manages all subcontractors and provides a guaranteed maximum price for a project. Interim County Administrator Sarah Plinsky has said the method could increase the efficiency and cost-effectiveness of the projects.

Also, “As a result of an overall reduction in detention equipment contractors and supply chain of materials, Turner has national buying power to secure services and supplies,” Plinsky wrote.

According to its website, Turner was responsible for the Anderson Family Football Complex at the University of Kansas, Allen Fieldhouse renovations, KU’s Hall Center for the Humanities, police headquarters in Olathe and phase two of a jail in New Century, to name a few.

For the behavioral health housing, county staff recommends Mar Lan Construction, the firm behind the Boys & Girls Club Teen Center, KU’s DeBruce Center, and improvements to the Douglas County Fairgrounds, according to its website. Mar Lan provided the low bid of $5,000 for preconstruction services.

Plinsky’s memo says that contract documents for both projects were being reviewed by counsel and may be available at the meeting or shortly thereafter.

The commission’s votes on CMR bids will not grant final approval to any specific projects. Both total project budgets will return to the commission for consideration when they are available, Plinsky wrote.

• Commissioners will consider the Lawrence Community Shelter’s request for a supplemental $148,000, which would come from the county’s general fund reserves. The commission first discussed the request during a work session on May 22, and at that time, commissioners and county staff indicated that they would like to see a sketch of a long-term revenue strategy and capital plan, as well as refined outcomes and data.

County staff is recommending that the commission approve the request, which would bring the county’s total funding for the shelter to $263,000 for fiscal year 2019. The shelter is requesting $296,000 for FY 2020, but that request will be considered alongside the rest of the county’s budget in coming weeks. The shelter has also asked the city of Lawrence for an additional $252,000 in 2019.

The commission will meet at 5:30 p.m. Wednesday at the Douglas County Courthouse, 1100 Massachusetts St. Complete agenda materials are available online via douglascountyks.org.