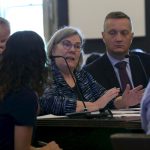 “I have to say, we are really lucky that we have not had an incident here,” she told Douglas County commissioners during their Wednesday work session on downtown space planning.

Though the facility is secured with on-site sheriff’s deputies and metal detectors at the public entrance, Kittel, Douglas County District Court Judge James McCabria and Capt. Doug Woods, of the Douglas County Sheriff’s Office, pointed out some issues with the building that could jeopardize staff, attorneys, the public, inmates and even the fairness of trials.

‘No reason’ for inmates in public space

The JLE holds many areas that are restricted to staff members and attorneys, some secure areas for inmates in custody and some areas that are open to the public. But all three groups often use the main public corridor, which could be problematic.

Woods explained to the commission that sheriff’s deputies shuttle inmates from the jail to the JLE for court proceedings and escort them to the “brig,” a secure holding area in the basement. When it’s time for the inmates to go before the judge, though, the routes to all but one of the courtrooms require inmates to pass through public hallways.

That was highlighted in the recent trials for three men now convicted in connection with a shooting in downtown Lawrence that left three people dead and two others injured on Oct. 1, 2017.

“The Mass. Street murder case really was an example of maybe a worst-case scenario where you have multiple defendants, large amounts of public coming in for the victims’ families, for the defendants’ families — and I would call it a security nightmare,” Kittel told commissioners.

She said that ideally, inmates would never go in the public space, and there’s “no reason” they should.

Kittel said that a couple of weeks ago, two staff members were verbally threatened with their lives and had to make police reports.

“So that’s what we’re facing,” she said. “We never know when someone comes in how angry they might be at some particular department.”

She said there needs to be some sort of barrier between the public and staff, whether it be protective glass or a system to buzz people in and out.

“There still needs to be a barrier between the public and staff in that way as they’re interacting, again, because people are getting angry, and I think that just gives the staff extra security,” she told the commission. 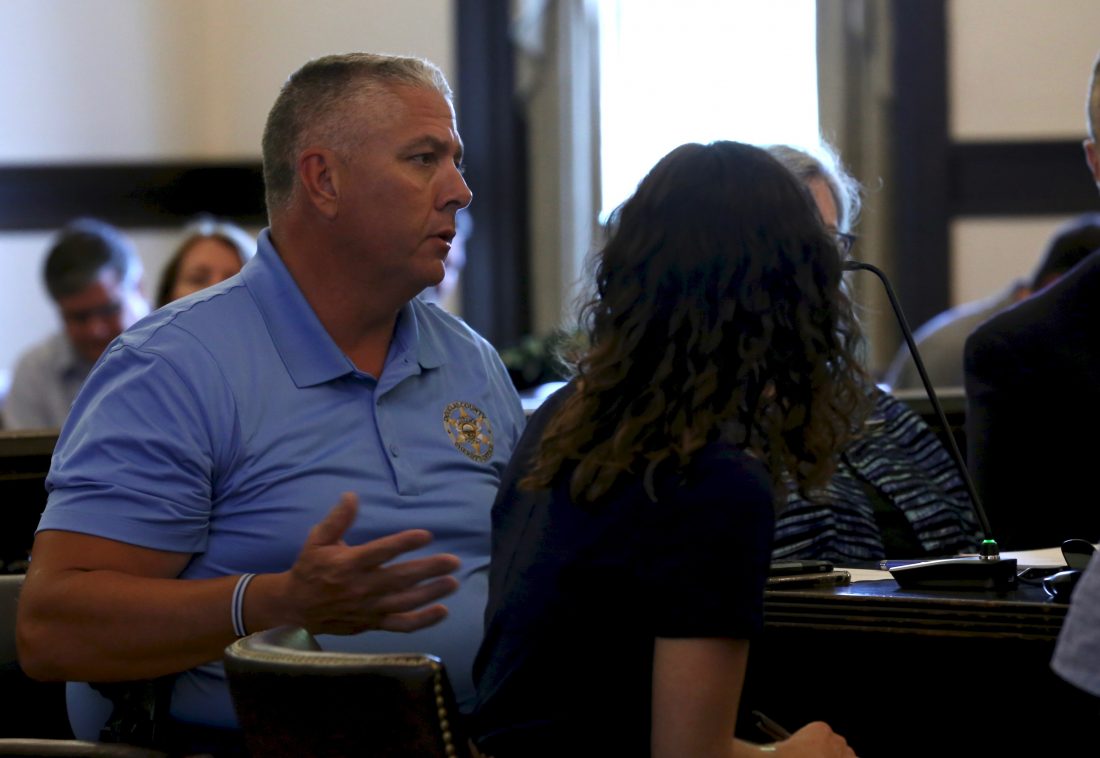 Capt. Doug Woods, of the Douglas County Sheriff’s Office, speaks about security issues in the Judicial and Law Enforcement Center during a Douglas County Commission work session on July 10, 2019.

Also, Woods said the brig is “just too small, and trying to keep everybody safe down there — the inmates, the officers and the lawyers that are coming down there to see their clients — and it’s just kind of that vicious cycle.

“As things grow, everything needs more space,” he said.

Kittel also mentioned a concern that could have implications for the accused: a small holding cell where inmates can go during court recesses. It’s near her chambers, she said, and she and her court reporter are used to hearing agitated people in the cell.

“Maybe it’s a care and treatment (case) and they’re having mental health issues,” she said. “… But we certainly couldn’t have a jury hear that.”

She suggested “some serious soundproofing, or we need to have jury rooms more isolated from the brig, the holding cells, so that we don’t interfere with their deliberations or have them influenced in any way by someone acting up. And it may not even be their case — maybe some other inmate.”

The larger focus of the commission’s work session was on potential options for downtown masterplans. Beyond the security and space concerns within the JLE, many county departments are housed within the historic Douglas County Courthouse, 1100 Massachusetts St. Within the next few years, some of those departments might need to move from their current locations as growth exceeds available space.

John Wilkins, a principal at Gould Evans, and Whitney Lang, a senior associate with the design firm, shared some possibilities for renovations to the JLE that could allow for isolated passageways for each the public, inmates and staff.

The building was designed to potentially add a third floor in the future, Lang said. Once Lawrence police move into their new headquarters, which will be constructed northwest of Sixth Street and Wakarusa Drive, that could free up enough space in the JLE to add a third floor but avoid moving other departments out of the building within a five-year plan.

Without an added floor, other departments would likely need to relocate within a five-year time frame. Both options envision the sheriff’s operations moving out within 10 years.

However, Interim County Administrator Sarah Plinsky stressed that the planning the commission was hearing about during the work session was in very early stages, and merely ideas and concepts at this time.

In an email response to questions from the Journal-World Thursday, Plinsky said there is significant planning and conceptual work to do, and that the projects could be prioritized and placed in a five-year capital improvement plan.

“We are planning for projects to be considered in the next 3-5 years, and that is not a firm estimate,” she wrote.

Legally, Plinsky confirmed via email, the commission could opt to use funds set aside for criminal justice capital in order to pay for renovation or security improvements at the JLE, but she said that has not been discussed. That is how a pilot drug court program will most likely be included in the county’s 2020 budget, as the Journal-World reported recently.