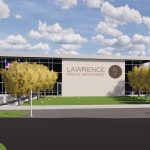 This rendering shows the design concept for the new Lawrence Police Department headquarters in northwest Lawrence.

The design of the city’s new $18.5 million police headquarters has been revealed, and officials say the building — which will be energy efficient and surrounded by parkland — will be an asset for police and the public.

Police Captain Anthony Brixius said the police department is excited about the function and the look of the headquarters, as well as the way public access to police is improved by the building’s location within a public park and the design of the building itself.

“I think it’s going to be a really a great community space and will bring a lot of people together,” Brixius said.

The approximately 50,000-square-foot building will let the department move out of the downtown Judicial and Law Enforcement Center, which it shares with Douglas County District Court and the Douglas County Sheriff’s Office.

The new building will house the police department’s patrol, records, IT, evidence and administration divisions. About 20 percent of the building will be partially finished space that could allow the department’s investigations division to locate in the headquarters in the future.

In August, the Lawrence City Commission authorized a $1.35 million architectural services contract with Leawood firm Hoefer Wysocki for the police headquarters. The headquarters will be built on undeveloped land owned by the city near Sixth Street and Wakarusa Drive, and the site plan also includes a city park. A plan for the park has also been completed, but that project is not yet funded.

Municipal Services and Operations Assistant Director Melinda Harger said that, in line with direction from the City Commission, the design of the headquarters focused on energy efficiency. That includes mechanical systems that are 30 percent more efficient than the building code minimum, 100 percent LED lighting with motion controls, large overhangs for shading, a reflective roof and continuous insulation, according to a memo to the commission.

“There is a lot of day-lighting, and some nice glazing for the exterior walls so it allows all that daylight in and allows some really nice views of all those mature trees that we’re keeping on the site,” Harger said.

Other green building elements noted in the memo include the use of local and regional building materials, utilization of the existing streambed for storm water detention and the use of nonirrigated, natural landscaping on the majority of the site.

Brixius said unlike the downtown building or the department’s training center in west Lawrence, the headquarters will actually be designed for police use. He noted there will be a clear public entrance and another entrance for all department personnel on the backside of the building, which opens onto a centralized entry area and break room for all staff. He said the layout creates camaraderie and increases the ability to communicate.

“That was one of the key things that we really wanted,” Brixius said. “We talk about bringing everybody back together, and that wasn’t just building space, but that was actually in your daily work life.” 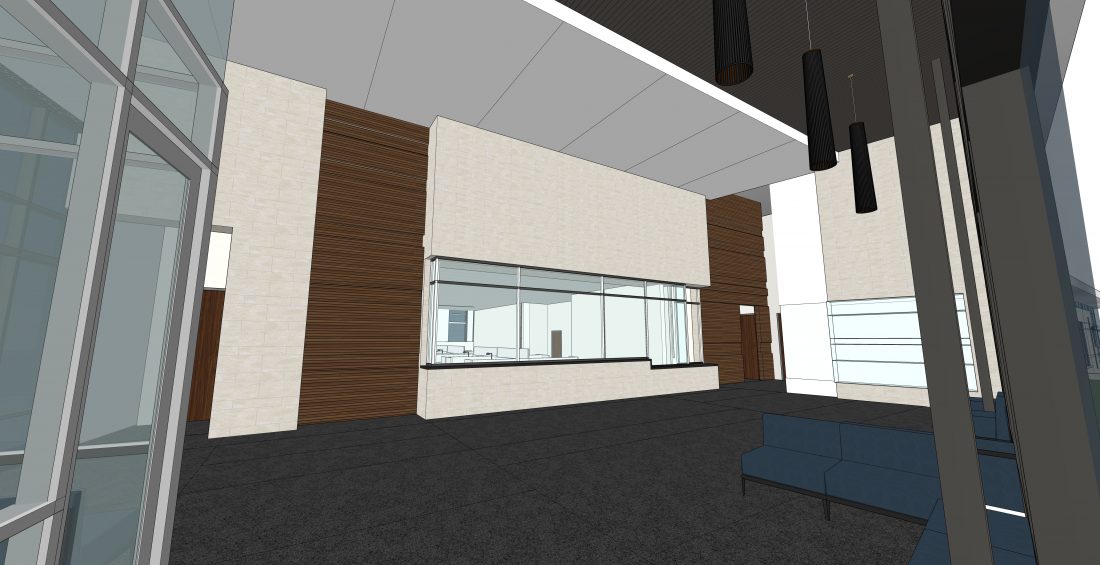 This rendering shows a design concept for the interior lobby of a new Lawrence Police Department headquarters in northwest Lawrence.

The headquarters will contain about 11,000 square feet of shell space, according to Harger. Shell space in the main building will eventually house the investigations division, and the plans also call for a shell outbuilding. The outbuilding will eventually allow the department to move its four crisis response vehicles from the former fire station on Stone Barn Terrace to the headquarters, which Brixius said will improve response times.

Harger said that adding the empty space now will save the city a lot of money when compared with having to add onto the building later.

City staff recently directed the design team to proceed with $1.8 million in budget reductions and alternate bid items in order to keep the project within budget, according to the memo. Regarding the budget reductions, Harger said the city aimed to get as many operations as possible into the headquarters with the money budgeted, and intentionally designed alternatives or future items that would need to be scaled back. 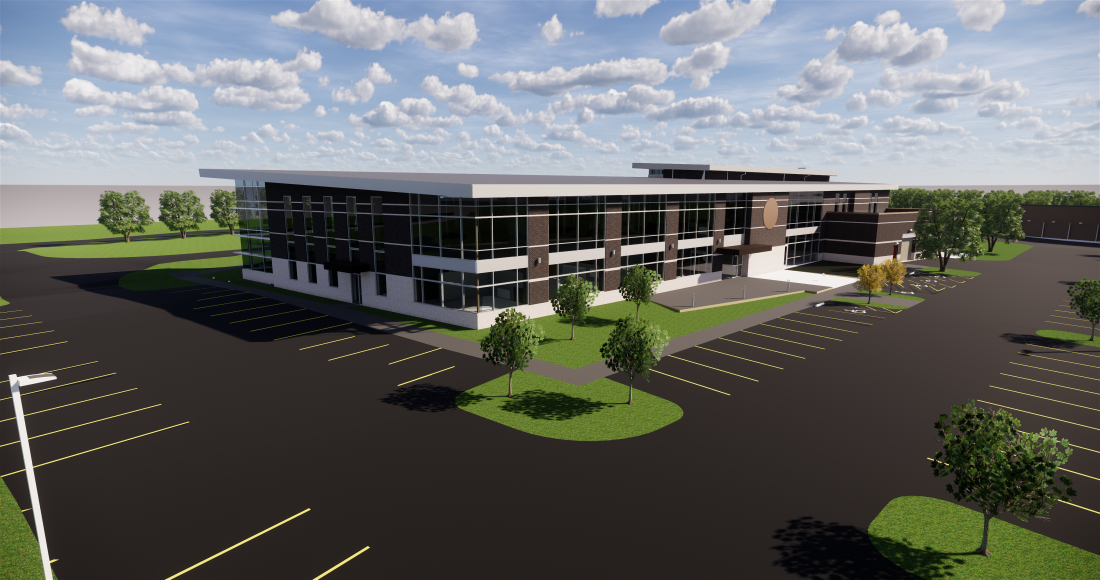 Harger said determining what will be included in the headquarters has been an evolving, ongoing process. She said that the construction manager at risk method, which allows the design team and the construction manager to collaborate early on, has allowed for that flexibility and also gives the city an idea of what it would cost to finish additional elements.

“We want to know what it takes to finish that investigations (area) because that’s very likely going to be a future (Capital Improvement Plan) item, so we need to know what does it cost if it was done as part of this contract,” Harger said.

Currently, the city expects that administration can be included in the headquarters but not investigations. Brixius said that getting the department administration, which includes the office of the chief, back with the majority of the workforce is a significant benefit. He said the possibility of getting investigations and patrol in the same building would increase daily communication and interaction and help solve crimes.

The design for the site also includes a plan for the surrounding city parkland. The design of the park includes about a dozen features, including a shared-use path, a treehouse, a rope bridge, fitness equipment and a boulder plaza with water spray features.

Many of the park’s features will be made of natural wood and materials, and Lawrence Parks and Recreation Director Derek Rogers said that the idea for more natural-looking play features came from feedback gathered from community meetings.

Rogers said there is not an estimate at this time of how much it would cost to include all the features in the park. He said the department plans to allocate $200,000 toward the park for 2021, which would allow for some basic park amenities, such as a concrete path and play equipment, but wouldn’t cover items such as restrooms, shelters and the water spray features. He noted all funding decisions would be made in the context of other Parks and Recreation projects as part of the budget process.

What will definitely be completed as part of the police headquarters project is a public art installation. The city’s long-standing resolution allowing it to set aside up to 2 percent of a project’s budget for public art provides $340,000 for the police headquarters site. The Lawrence Cultural Arts Commission will oversee the art selection process, and has determined the art should be installed within the park to be accessible to the public. The LCAC will issue a request for qualifications for the art project this spring, according to the memo. 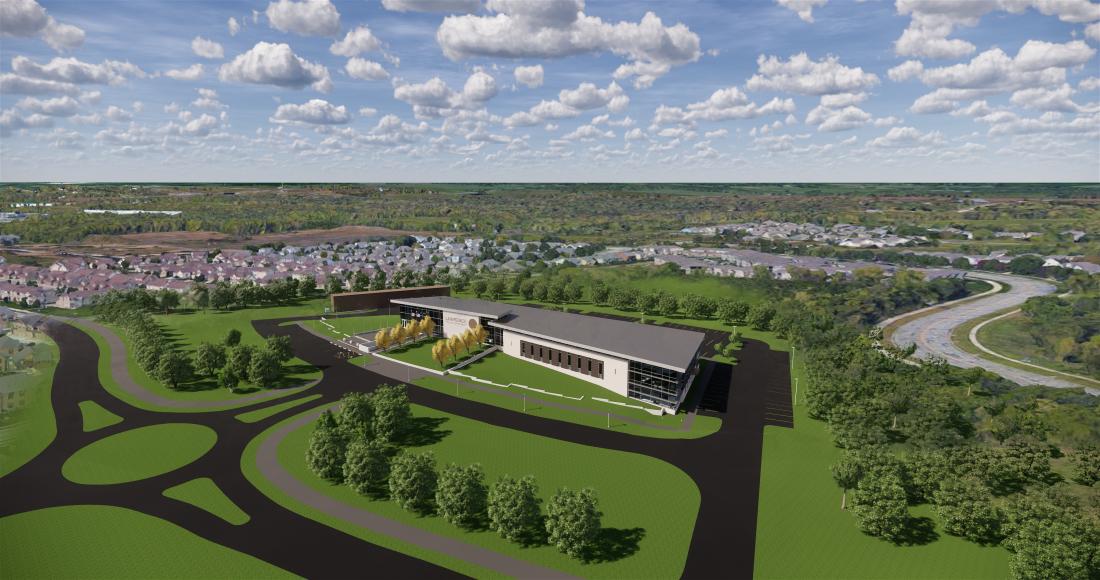