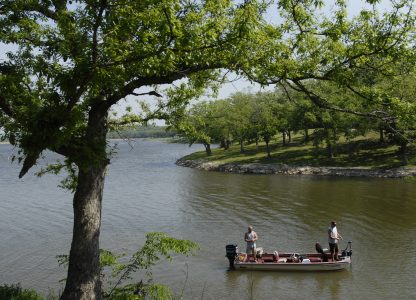 Mike Martinez, left, and Lee Merrill, both of Lawrence, fish for bass on Lone Star Lake in this file photo from May 2007.

Water activities at Lone Star Lake will be prohibited later this week while the Douglas County Public Works Office treats the lake for an invasive plant.

The county announced in a news release last week that the Public Works Office plans to treat the lake for Eurasian watermilfoil, an invasive species, on Wednesday and Thursday. Water activities in the lake will be prohibited for 24 hours after the treatment.

Crews will use the herbicide Navigate, which is a granular substance that sinks to the bottom of the lake, according to the county. Park visitors and residents are also encouraged to keep their pets out of the treated portions of the lake for 24 hours after treatment, the county said.

County commissioners approved the treatment of the lake during their July 24 meeting, when Public Works Director Keith Browning reported that parts of the lake were infested with the plant. He said the county treats the lake every year to cut down on the spreading of the plant, which can grow rapidly.

Although a county resident protested the treatment, Commissioner Michelle Derusseau said the treatment was necessary to ensure the safety of swimmers.

“You can get tangled up in that stuff, and I consider it a hazard for swimmers,” she said during the meeting.