Community Police Review Board members say board is just a ‘rubber stamp’ for police, call for more review powers 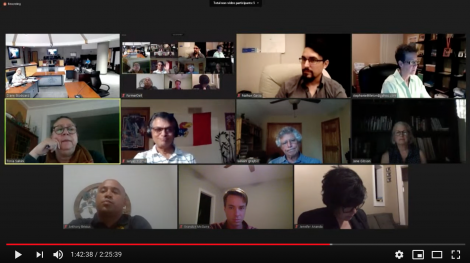 Members of the city's Community Police Review Board and city staff members participate in a virtual meeting on June 23, 2020.

Lawrence’s Community Police Review Board is calling for a review of its structure and powers given that the board has yet to review any complaints against police since it was created nearly two years ago.

As part of its meeting Tuesday, the board voted unanimously to establish a work group to review the board’s structure and recommend changes to the City Commission. Specifically, the work group will review the board’s bylaws and the city ordinance that created the board and determine what powers and documents are necessary for the board to fulfill its charges of advising the city regarding issues related to police bias and providing community oversight of complaints against police.

Board members made some pointed critiques of the way the board was set up, saying that its narrow review powers and limited access to information made it nothing but a “rubber stamp” for the police department. Board member Bill Graybill said even if the board were to review a complaint, it would not have access to anything but the police investigation, which the police had broad authority to redact.

“It appears to me after I really looked at it hard that the title of this committee is pretty disingenuous,” Graybill said. “…We haven’t reviewed anything. And if we did have (a complaint) to review, we wouldn’t be able to review anything.”

As the Journal-World recently reported, the board, which the Lawrence City Commission set up two years ago, has examined none of the at least 25 complaints against police because of limitations on its review powers. Because of the way it is structured, the board is only allowed to review complaints against police that involve racial and other bias, and only if someone appeals the police department’s decisions. Even if an appeal is made, the board has no investigative powers and can only review the police department’s investigation of the complaint and send a recommendation to the city manager to review.

Board member Jane Gibson said the board’s limited purview, lack of access to information and lack of power and independence left it useless. She said the restrictions on the board left it both blindfolded and with its hands tied.

“There is no community oversight of most of the complaints against the Lawrence Police Department and none since the board was created, because there have been no appeals,” Gibson said. “So this restriction defeats the purpose of having a Community Police Review Board in the first place if no complaints come before us.”

Gibson created a working document that outlines various issues with the bylaws and ordinance that govern the board, which is available as part of the board’s agenda materials. Issues identified in the document include the narrow purview of the board, its lack of investigatory power, and the fact that it can only review the findings made by the police department itself. The document also notes confidentiality agreements that the board is required to sign that limit public discussion of complaints.

As part of its meeting, the board created a three-member workgroup comprising Graybill, Gibson and board member Stephanie Littleton to review the board’s structure and powers. The board voted that Gibson’s document would be the starting point for the work group, and the group’s findings will be brought back to the board for consideration before the final recommendation is sent to the City Commission.

The board called for the work group to have its review complete within 90 days and to provide regular updates to the board on its progress.