City leaders expressed support for a new layout for downtown that limits parking in an effort to give businesses more space to safely operate during the coronavirus pandemic, but wanted the city to remain open to other alternatives.

As part of its meeting Tuesday, the Lawrence City Commission got its first look at the temporary layout proposed for downtown Lawrence that decreases the space allocated for driving lanes and parking spaces in order to increase room for outdoor commerce and pedestrians. Commissioners generally expressed support for the plan, and the city’s efforts to get the changes approved and implemented quickly.

• May 31 — To respond to COVID-19, proposed downtown layout would have less space for cars, more for pedestrians and outdoor dining

Vice Mayor Brad Finkeldei said he had heard from some in the community who said no parking should be taken away and others who said all of Massachusetts Street should be turned into a pedestrian zone, and he thought the proposal addressed the needs of all businesses.

Downtown Lawrence Inc., the architecture and design firm Gould Evans and other local partners helped create the layout, which Gould Evans representatives presented at the meeting Tuesday. The layout would narrow the driving lanes on Massachusetts Street and replace the angled parking along the roadway with parallel parking, which would be designated for curbside pickup. The space those changes freed up would essentially widen the sidewalk, allowing for another pedestrian walkway and an additional area for outdoor dining and retail sales. Other components of the proposal allow businesses along downtown side streets to convert existing parallel parking stalls for outdoor commerce. 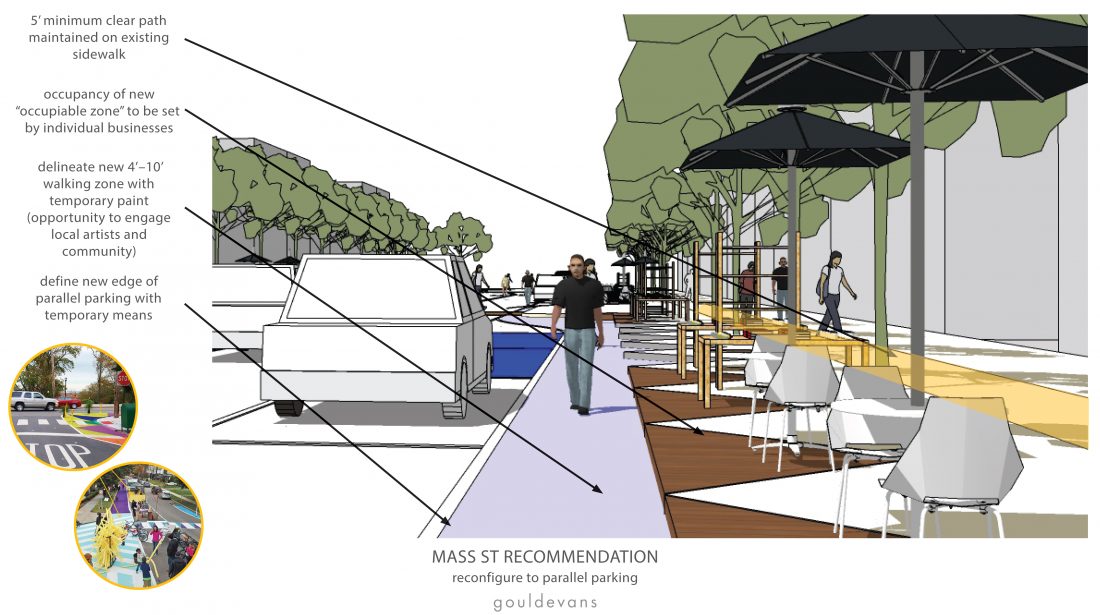 Some commissioners also said they were open to other options and that they wanted the city to remain open and flexible. Both Commissioner Lisa Larsen and Mayor Jennifer Ananda said they were interested in whether Massachusetts Street could be temporarily made into a one-way street to create even more room for pedestrians and outdoor commerce. Ananda said she was also tempted to explore other configurations, such as something similar to the pedestrian zone on Pearl Street in Boulder, Co.

As part of the meeting, Assistant City Manager Diane Stoddard shared cost estimates for the materials and staff time needed to make the proposed changes to the downtown streetscape. The overall cost would be $98,000, including about $56,000 for equipment, city personal costs and materials, including new parking signs, pavement markings, traffic delineator posts and rubber curbs. Another $14,000 is included for contingency and another $28,000 to demobilize the changes.

Stoddard said that the city was currently taking feedback on the plan on the city’s Lawrence Listens website, and that the proposal would be brought back to the commission for a vote on June 9. She said if the commission approved the plan, it could be implemented in two to three weeks

• Voted unanimously to provide $446,184 of federal coronavirus relief funds to the Lawrence Community Shelter, 3655 E. 25th St. The grant, allocated to the city under the Coronavirus Aid, Relief, and Economic Security Act, will enable the homeless shelter to construct an isolation ward and other building improvements to help the shelter respond to the pandemic.