If downtown businesses are going to safely operate during the coronavirus pandemic, cars are going to have to give people more room.

At least that’s the premise of a temporary layout proposed for downtown Lawrence, which downtown leaders and city officials hope to see put in place soon. Downtown Lawrence Inc., the architecture and design firm Gould Evans and other local partners helped create the proposal, which reconfigures the downtown street layout to provide more room for pedestrians and outdoor sales and dining.

Downtown Lawrence Inc. Executive Director Sally Zogry said the purpose of the proposed layout is to allow businesses to operate within social distancing guidelines, which call for people to maintain a 6-foot distance from one another. In the midst of the pandemic, Zogry said providing businesses more outdoor space is needed to make customers comfortable and enable businesses to succeed.

“At the heart of it is making sure businesses can stay in business,” Zogry said. “And the way they will be able to stay in business is having people feeling comfortable and having enough space to move.”

More specifically, the layout would narrow the driving lanes on Massachusetts Street and replace the angled parking along the roadway with parallel parking, which would be designated for curbside pickup. The space those changes freed up would essentially expand the width of the sidewalk, allowing for another pedestrian walkway and an additional area for outdoor dining and retail sales. Other components of the proposal allow businesses along downtown side streets to convert existing parallel parking stalls for outdoor commerce. 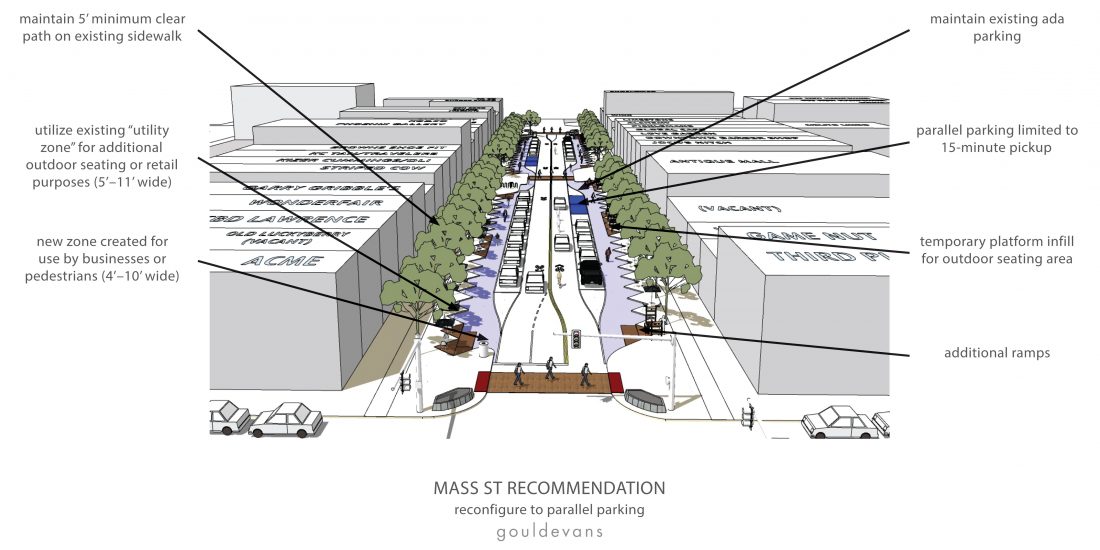 Zogry said the DLI board of directors and a workgroup of downtown businesses provided input on the proposal, and the plan was also drafted in collaboration with city staff. Gould Evans, which has its headquarters in downtown Lawrence, has worked pro bono with DLI to develop the concept plan and will present it to the Lawrence City Commission at its meeting Tuesday. Following the presentation, additional feedback will be gathered from downtown businesses and property owners regarding the proposal, according to a city staff memo to the commission. In order to move forward with the changes quickly, city staff is recommending that the commission vote on the proposal at its meeting on June 9.

In addition to the changes to the traffic lanes and parking structure, the proposal requires a 5-foot-wide walking path, at minimum, to be maintained on the existing sidewalks downtown. An additional 4- to 10-foot walking zone would be added in between the parallel parking spaces along Massachusetts Street and the newly created outdoor dining and retail areas.

Along New Hampshire Street, Vermont Street and the numbered streets downtown, businesses could convert the existing parallel parking stalls into dining or retail space. Like the Massachusetts Street businesses, the businesses located on side streets would still be able to use a portion of the sidewalk directly in front the building for commerce as well. 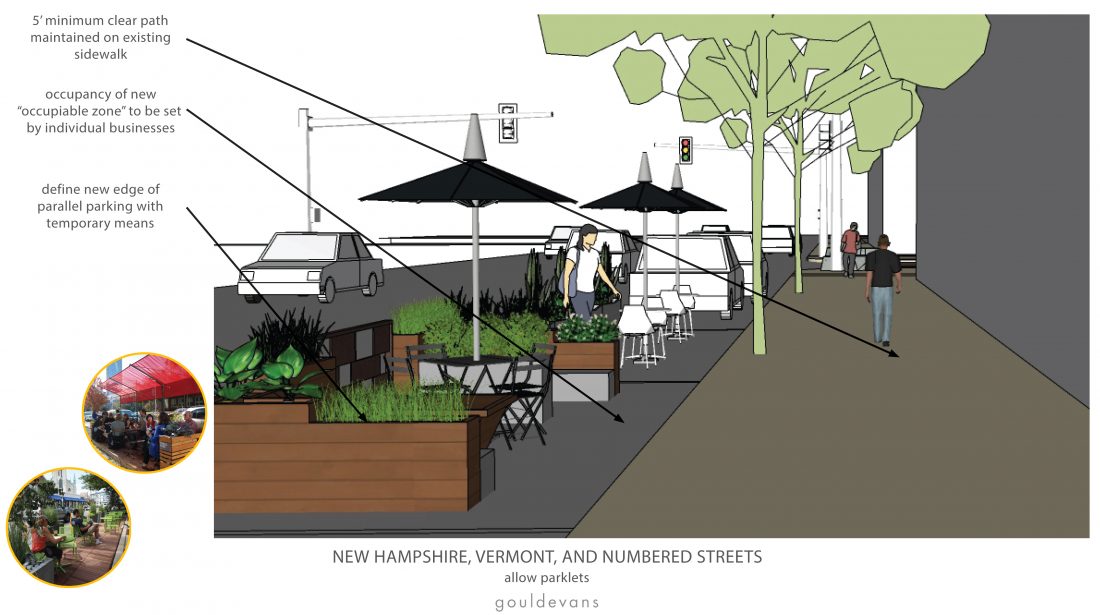 A new temporary layout proposed for downtown Lawrence would allow businesses along side streets to convert parking stalls into areas for outdoor dining and retail.

The plan calls for occupancy limits in the new dining and retail areas to be set by individual businesses. In addition, the plan calls for stations that dispense hand sanitizer to be placed throughout the downtown area.

According to the Centers for Disease Control and Prevention, the virus is thought to spread mainly between people in close contact, within about 6 feet, through respiratory droplets produced when an infected person coughs, sneezes or talks. Transmission via surfaces may also be possible if someone touches a surface or object that has the virus on it and then touches their own mouth, nose, or possibly their eyes. In its guidance for restaurants and bars that are reopening, the CDC states that businesses should promote social distancing by providing delivery or curbside pick-up options, arrange dining tables 6 feet apart and prioritize outdoor seating as much as possible, among other measures.

Lawrence-Douglas County Public Health supports the proposed downtown layout. Sarah Hartsig, a community health planner for the health department, said in an emailed message to the Journal-World that the proposed reconfiguration would not only slow the spread of the virus, but would also help people imagine new ways to use the downtown area in the future.

“We believe that the DLI proposal supports and reinforces the message of ensuring social distance to protect against the spread of COVID-19 and at the same time creates new and innovative ways to think about our downtown space that can have positive implications for the future of our built environment,” Hartsig said.

Cost of the plan

Zogry said the business owners who would like to expand their operations into the newly created dining and retail area would build out their own space. That includes adding railings or other features and putting in place a temporary material to make the former angled parking spots level with the existing sidewalk. However, implementing and managing the new layout would require city staff time and the purchase of some materials.

Assistant City Manager Diane Stoddard said that the city plans to provide a streamlined permit process for the new areas that could be administratively approved and would cover both the expanded sidewalk formerly occupied by the angled parking and the sidewalk area adjacent to downtown buildings that is currently available for sidewalk dining. Because of the circumstances and because the changes would be temporary, Stoddard said city staff is recommending there be no charge for the permits. Stoddard said the proposal was similar to changes recently made that temporarily allow businesses outside the downtown to use their parking lots for outdoor dining or other commerce.

“The city is just trying to be flexible and be a good partner with the businesses to get them operating, and operating in a safe manner,” Stoddard said.

The license agreement would specify the area to be used, require the business to be responsible for cleanup within the area, and enable the city to have access to the area as needed for any emergency response or repairs, among other details, according to the memo. Stoddard said the agreements would also allow businesses to serve alcohol in the new areas as long as they have a license to serve alcohol in their existing sidewalk dining areas.

As of Friday, the city did not have an estimate for how much the changes would cost the city, but Stoddard said she hoped to have that information determined soon so that it could be shared with the commission on Tuesday. She said the main cost would be the physical materials — new signs directing people to parking, paint to delineate the new traffic lanes and parking stalls, and barriers between the parallel parking and the new walking area.

A balance between cars and people

In addition to allowing for social distancing, the framework for the plan considered several other factors, including the ability to be implemented quickly, put in place at minimal cost and be viable for 18 months or longer. Other factors noted in the framework include allowing curbside services to continue, maintaining existing handicap-accessible parking, and following fire and medical requirements.

Parking downtown is another element of the plan; the proposal will take away some parking spaces along side streets, and the parking along Massachusetts Street will be reserved for curbside pickup. Zogry said curbside service has been crucial for all types of businesses, and that option needed to be maintained. Regarding any concerns about the loss of parking, she noted that the parking spots along Massachusetts Street only make up 11% of the available parking downtown, with the vast majority of parking located in surface parking lots and the three city parking garages.

“People just need to use them,” Zogry said. “This is a good opportunity to educate all of us about how much parking we have and where it’s located.”

On the other side of that debate are those who might suggest even larger pedestrian zones. Zogry said the DLI board and the work group discussed the plan for six weeks and that the plan had gone through multiple iterations. Discussions included the possibility of temporarily converting some traffic lanes or blocks into pedestrian zones, but ultimately Zogry said the city must consider that downtown is linear, and that such closures would affect customers’ ability to reach certain businesses.

Ultimately, Zogry said she thought the plan worked to balance all the needs.

“There is never going to be one thing that pleases everyone, so we’re feeling this is the best situation to kind of tick all the boxes,” Zogry said.