Lawrence no longer most LGBTQ-inclusive city in Kansas, but officials say improvements are underway 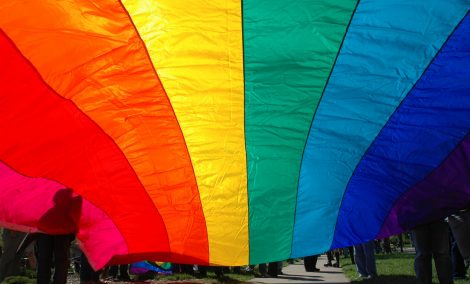 A pride flag whips in the wind as marchers prepare to head down Massachusetts Street in this file photo from April 23, 2005.

Lawrence may no longer be ranked as the most LGBTQ-inclusive city in Kansas, but city officials say they are making strides to improve inclusiveness for LGBTQ people in city governance.

Previously, Lawrence was the most LGBTQ-inclusive city in Kansas, according to the Human Rights Campaign’s annual Municipal Equality Index. The index measures how inclusive municipal laws, policies and services are for LGBTQ people. Assistant City Manager Casey Toomay, who is also the City of Lawrence’s liaison for LGBTQ issues, said the city was glad that it improved over last year’s score but that her hope was to someday fully address all the factors measured by the index.

“We’re obviously excited that we did make some progress, but we know that we have some additional work that we need to do,” Toomay said. “Some of that work is already underway.”

Lawrence had the highest score in the state in 2017. Overland Park and Manhattan have since made some big jumps in their scores and now hold the two highest scores over Lawrence, according to scores listed on the Human Rights Campaign’s website. With a score of 69 out of 100 for this year, Lawrence is still above the national average of 60 and the state average of 53.

Measuring how inclusive municipal laws, policies and services are for LGBTQ people

The Human Rights Campaign, in partnership with the Equality Federation Institute, ranks hundreds of U.S. cities as part of the annual index. Rankings across the country vary from single-digit scores to 100. The index includes five categories: nondiscrimination laws; the municipality as an employer; municipal services; law enforcement; and leadership on LGBTQ equality. Cities can also receive bonus points in some categories, for things such as having openly LGBTQ elected or appointed leaders.

Toomay explained that the city does track hate crime statistics but that the Lawrence Police Department recently changed software providers and that the new software is not compatible with the Kansas Bureau of Investigation or FBI software. She said the city submitted those statistics on paper to the KBI, which would be the agency to forward that information to the FBI had it been submitted electronically. Toomay said the city was talking with its software provider to try to resolve the issue.

Still, the city gained a few points in other categories and Toomay said multiple efforts were already underway. Specifically, the city gained a point in the subcategory that measures leadership’s public position on LGBTQ equity. Toomay said that was due to the LGBTQ pride proclamation that the City Commission issued in June. The city also gained two bonus points for having an openly LGBTQ elected leader. As the Journal-World reported at the time, Vice Mayor Jennifer Ananda identified herself as a queer woman when she was elected to her position in January.

Several city efforts are currently underway and Toomay expects them be complete by next year, including transgender-inclusive health care benefits, a subcategory where the city received zero points. She said that the city now provided those benefits to its employees and that the city’s schedule of benefits would reflect that change for next year’s index. She said the city also provided domestic partner benefits for its employees in practice and was in the process of writing that practice into its policies. The police department is also in the process of appointing an LGBTQ police liaison.

Toomay said that she was shooting for full points on the index and she thought the city could get there. She said the point of the effort, though, was not about a score.

“I think it’s very important that we continue to work on these things, not just to get the highest score in the state but because we want to make sure that we’re treating all people in a way that they deserve to be treated,” Toomay said.