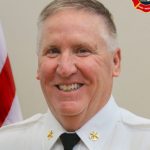 Markus, who appointed Coffey as interim chief in July 2018, said in a city news release that he had watched Coffey lead the department through several challenges in the past 11 months and thought he was a good fit for the job.

“I’m impressed by Shaun’s integrity as well as his technical and management skills,” Markus said. “His 34 years of service to the Fire Medical Department is demonstrative of his ongoing dedication. I expect Shaun to reach out to all members of the department to work together to continue moving the department forward for the benefit of the whole community.”

The city began a search for a new chief in March. Former Lawrence Fire Chief Mark Bradford died in July 2018, and Coffey has been serving as interim fire chief since then. In May, Markus named Michael Baker of Tulsa, Okla., and local candidates Coffey and Tom Fagan as the finalists for the fire chief position. The Lawrence firefighters union, Local 1596, voted unanimously at a meeting earlier this month to publicly endorse Baker, according to a news release from the union.

Coffey has worked for the Lawrence-Douglas County Fire Medical Department since 1985, serving in several positions. His appointment as chief begins immediately, according to the release. The chief oversees 149 employees who work out of seven facilities, the release said, noting that the Lawrence-Douglas County Fire Medical Department handled 13,295 incident calls in 2018.

Coffey said in the news release he is excited to become chief.

“After months of serving in an interim capacity, I am excited to formally lead what I know is a great team of hard working and high skilled professionals,” Coffey said. “The Lawrence-Douglas county Fire Medical Department is well positioned to move forward and I’m eager to work with this team to continue serving our community.”