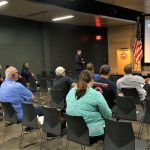 Members of the public gather for a question-and-answer session with candidates for the new chief of Lawrence-Douglas County Fire Medical on Saturday, June 8, 2019, at the Lawrence Public Library.

Recruiting firefighters and paramedics will be a big challenge for the next chief of Lawrence-Douglas County Fire Medical, the three candidates for the vacant chief position told those attending a question-and-answer session Saturday at the Lawrence Public Library.

The forum, which drew about 25 people, was part of a busy two days for the three finalists vying to succeed the previous chief, Mark Bradford, who died in July 2018. Two of the finalists, Shaun Coffey and Tom Fagan, are internal candidates; the third finalist, Michael Baker, currently works for the Tulsa (Okla.) Fire Department. After the three candidates finished up at the library, they were scheduled to tour paramedic and fire stations in Baldwin City and Eudora before having their final interviews with the city.

At the forum, Lawrence City Manager Tom Markus told the Journal-World he plans to name the new chief later this month, probably in the week of June 16.

All three finalists worked in both fire and medical crews before rising through the ranks to administrative positions. Each candidate has a bachelor’s degree and numerous professional certifications, and Baker additionally completed a master’s degree in security studies from the Naval Postgraduate School in Monterey, Calif.

Coffey, who was named the local department’s interim chief after Bradford’s death, joined the department in 1985 and rose to the position of division chief for training. He currently serves on the board of the Douglas County Local Emergency Planning Committee and is the section chief for the Northeast Kansas All-Hazards Incident Management Team.

Coffey said his style of leading by example reflects his years of experience in the department.

“I don’t ask anybody to do anything I wouldn’t do myself,” he said. “When I ask somebody to do something, I have full confidence I could do it myself.”

The department’s biggest strength is its personnel, Coffey said, and its biggest challenge is the same one that departments are facing nationwide: recruiting new personnel, especially paramedics. The department works closely with Kansas City, Kansas, and Johnson County community colleges to recruit new paramedics, he said, but it would probably have to cast a nationwide net to find the best talent. He was encouraged by a public service curriculum the Lawrence school board approved last year that introduces high school students to emergency medical technician training and creates interest in careers as first responders, he said.

Another challenge for the department has been a steady increase of call rates of about 3% a year, Coffey said. Contributing to that was the large increase in nonemergency responses, such as helping residents with wheelchair lift assists. He said the department is partnering with LMH Health and Bert Nash Community Mental Health Center to develop programs that will reduce the number of nonemergency calls first responders have to deal with.

Fagan, Lawrence-Douglas County Fire Medical division chief for administration, said recruitment would become more crucial with the looming retirement of officers, firefighters and paramedics. The department needed to maintain its partnerships with area community colleges and find other ways to expand its reach in the Kansas City metropolitan area, he said.

Fagan said he is a believer in using data to define problems and suggest solutions. At the forum, he noted that bystanders witness a greater percentage of cardiac arrests in Douglas County than in the U.S. at large, but that those witnesses intervene with CPR and other lifesaving techniques at a lower rate than the national average. That suggests a huge opportunity for further public education and training programs in the county, he said.

Before Fagan joined Lawrence-Douglas County Fire Medical in 2017, he said he headed the Lee’s Summit (Mo.) Fire Department’s effort to gain accreditation during his 17 years on that department. That experience and his later work reviewing the accreditation efforts of other departments gave him the opportunity to witness departments enacting new and innovative practices, he said.

Baker, a 24-year veteran of the Tulsa Fire Department who now serves as its director of emergency medical services, said his leadership style was built on trust.

“I’ve worked for micromanagers and I’ve worked for a helicopter boss who looked over my shoulder constantly,” he said. “I have found when I trust my team members, assigning tasks with timelines and benchmarks of review, they grow.”

Baker said the department needs to get out in the community to enhance recruitment. When he was a station captain in Tulsa, he, his supervisor and his firefighters and paramedics started visiting the school across the street from the station to read to students and give them positive role models in the first responder community. Students at Douglas County’s universities offered the department an untapped pool of candidates for recruitment, he said. He also suggested EMT and paramedic instructors should be “embedded” in learning institutions in the county to increase the candidate pool.

A former TV cameraman and public information officer for the Tulsa department, Baker said having a strong community presence was vital. He said he was among the first to use Twitter and Facebook in Tulsa city government, but he also stressed that community presence also included bigger commitments, such as showing up at public events with trucks or participating in planning sessions that don’t directly deal with public safety issues.

City leaders have committed to a public review of the Lawrence Police Department’s use-of-force policies, with ...