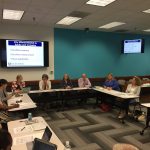 Lawrence Vice Mayor Jennifer Ananda, in gray in the top left, talks about the city's equity efforts at a joint meeting of City of Lawrence, Douglas County and Lawrence school district leaders on June 24, 2019.

City, county and school district leaders say they want to work together in their efforts to address equity issues in the community, and they took a first step toward doing so Monday.

Elected leaders and officials from the City of Lawrence, Douglas County and the Lawrence school district met Monday afternoon to discuss each entity’s efforts related to equity, and they resolved to communicate more on the topic. The school district has been focusing on equity for more than 10 years, and Superintendent Anthony Lewis opened the meeting by saying that it needed to be a communitywide conversation.

“This can’t just be a Lawrence Public Schools thing, right?” Lewis said. “It has to be an entire community, a city, countywide thing, if we’re really going to address the number of equity issues that we come in contact with.”

Deputy Superintendent Anna Stubblefield then went through the school district’s equity-related efforts, including diversity training for staff, formation of school equity teams and attention to differences in achievement, discipline and advanced placement between students of color and their white peers. She said the district’s goal is to embed equity in everything it does.

Vice Mayor Jennifer Ananda, an attorney and social worker, went through some of the commission’s efforts. Those included diversifying appointments to the commission’s advisory boards and the city’s participation in the Government Alliance on Race and Equity, which is a national network of governments working to achieve racial equity and advance opportunities for all, according to its website.

Ananda said that she thinks addressing equity issues will take a broader shift in the community. As far as external efforts, Ananda said the city could potentially offer diversity training for its community partners through GARE and make additional efforts to broadly engage the community.

As far as the county goes, the city and county are partnering to conduct a disproportionate minority contact study to gather demographic data on law enforcement stops. Ananda said the trial period for that study will begin in September.

All leaders said they were open to partnerships to collaborate regarding equity, and one idea suggested was working together to provide more mentorship and job shadowing opportunities. Toomay said she would be reaching out to others regarding the city’s efforts.