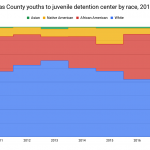 In 2017, African American youths outnumbered white youths in admissions to the juvenile detention center of Douglas County, where the population is 83.5% white.

That year, the Douglas County youths admitted to the JDC were approximately 41% white, 49.5% African American, 6.7% Native American and 2.9% Asian. In 2018, the percentages were roughly 48%, 44.9%, 5.5% and 1.6%, respectively, according to numbers from Pam Weigand, director of Douglas County Criminal Justice Services.

Those statistics stood out to County Commissioner Patrick Kelly during a Wednesday work session on juvenile criminal justice services. He asked Weigand to provide some background on that and what staff is doing to help lessen the racial disparities.

Disparities by the numbers

The JDC admits youths who are alleged juvenile offenders, or JOs, and those involved in child in need of care, or CINC, cases. Not all of the youths admitted to the JDC have been charged with crimes. 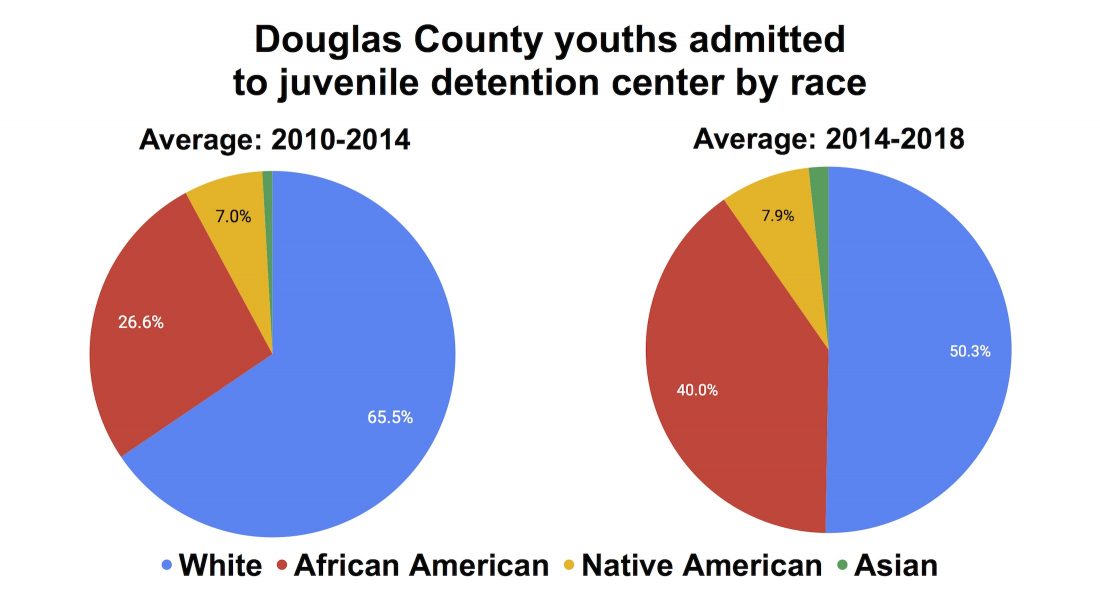 Throughout those years, the ratios of white youths to youths of color admitted to JDC have fluctuated. The average from 2010 through 2018 shows Douglas County youths admitted to JDC have been about 58.7% white, 32.6% African American, 7.4% Native American and 1.3% Asian, according to numbers from Weigand’s presentation.

According to the latest Census data, Douglas County’s population as a whole is 78.3% white alone (not Hispanic or Latino), 6.4% Hispanic or Latino, 4.6% African American, 2.7% American Indian and Alaska Native, 5.1% Asian, .1% Native Hawaiian and Other Pacific Islander and 4.1% two or more races.

‘We know we’ have a problem

In 2011, Douglas County signed on to the Annie E. Casey Foundation’s Detention Alternatives Initiative. The foundation is a Baltimore-based nonprofit that, in part, aims to improve outcomes for youths who become involved in the juvenile justice system, according to its website at aecf.org.

Weigand said that foundation looked at issues such as disproportionate minority contact and case processing. However, the numbers of the JDC population are small, compared with other facilities, Weigand said. In 2017, 52 African American youths, 43 white youths, seven Native American youths and three Asian youths were admitted to JDC. In 2018, the numbers were 57, 61, seven and two, respectively.

“They just look at us and think we don’t have a problem,” Weigand said. “We know we do, but it’s on a much smaller scale.”

In recent years, the county has ordered studies to try to determine the reasons for racial disparities in the population of the Douglas County Jail, which serves adults.

Among them is one that Weigand mentioned during the Wednesday work session: a law enforcement contact study that is currently underway.

As the Journal-World has reported, law enforcement officers from the Baldwin City, Eudora, Lawrence and University of Kansas police departments and the Douglas County Sheriff’s Office are currently tracking the perceived races and ethnicities of drivers and pedestrians they stop, as well as the outcomes of those interactions.

Juveniles are included in that study, which over a two-year period will aim to determine what disproportionalities and biases exist and provide steps of action going forward.

As mentioned above, Weigand said Criminal Justice Services does not decide whom it serves; rather, that department handles cases brought by the courts, law enforcement and the Kansas Department for Children and Families. Among others present at the work session were Douglas County District Attorney Charles Branson and the county’s Criminal Justice Coordinator Robert Bieniecki, but neither spoke.

Kelly said he wanted to “keep pressure on” the racial equity issue.

“That’s concerning, and I know there are many entry points, so it sounds like we’re working on the first one,” he said.

Kelly, who is also the director of the Lawrence College and Career Center, said he knew the Lawrence school district had been focusing on equity and “why so many students of color are ending up in our system.”

“That alarms me,” he said. “I think we need to just keep asking questions and keep searching for answers.”

Weigand said she didn’t know how to fix it, but she knows that “there are things that need to happen.”

“I’m hopeful that we’ll figure it out as we go along,” she continued. “Our goal is to not touch people who don’t need to be touched in terms of being in our system. We’re trying to divert kids as much as we can so that they don’t end up with a criminal record and have something impact the rest of their lives in a negative way.”