Parks and Rec board hears public concerns about closing Community Building, says entrance fees will be barrier for low-income residents 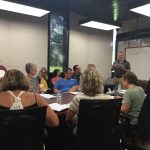 More than a dozen people crowded into a small meeting room at the Lawrence Parks and Recreation administrative building Thursday to explain why they thought the Community Building should remain open and free to the public.

A father of two told the Parks and Recreation Advisory Board that when he was unable to pay the water bill, his family went to the Community Building to shower. Another woman said when she was overweight and had little money, she was able to use the building to work out as much as she wanted and is much healthier now. Others said they saw it as a safe place for kids to hang out downtown and get exercise playing basketball.

The board held a special meeting to further discuss the city manager’s recommended budget proposal that, in order to account for a $675,000 budget reduction, calls for closing the downtown Community Building for drop-in use, charging entrance fees at recreation centers citywide and increasing other recreation fees, among other elements.

Lawrence resident Megan Williams told the board that when trying to make such budget decisions, the city needs to consider what populations are affected by their choices.

Regarding fees, the proposal would require key cards to enter recreation centers and charge annual entrance fees based on age, ranging from $24 to $48 annually and more for nonresidents. Those under 18 would only be charged $5 to purchase a key card. Parks and Recreation Director Derek Rogers told the board that exact revenue is unknown because the department has limited data about recreation center usage, but it is estimated based on other communities that the fees would generate about $175,000.

Fees would be reduced for low-income residents. Specifically, a previous memo to the City Commission states that the department will work with Lawrence nonprofit service agencies to provide reduced rates for low-income individuals and others in need to access the community and recreation centers.

Members of the board, who have been tasked with providing a recommendation to the commission following the public announcement of the budget plan last month, voiced strong concerns about how the proposal would affect low-income residents. A board committee that examined equity issues with the proposal noted in its report that research is conclusive that low-income residents are more reactive to fees than high-income residents, and that even small user fees may substantially reduce their recreation participation.

Board Chair Marilyn Hull said whenever fees are charged, it’s going to be a barrier for some people and that it was clear the policy would create additional inequities. She said the board hadn’t seen anything to show that everybody who needed assistance would get it.

“The staff response that we’ve received to that, to date, seems inadequate,” Hull said. “We’ve been told that they will work with some local nonprofits to try to help some folks get access, but the fact is that not every low-income or marginalized person is connected to a nonprofit.”

Increasing Parks and Recreation user fees has been a discussion point at City Hall in recent years. One of the key finance issues in the department’s 10-year master plan, which was adopted in 2017, was the need to standardize the pricing process and increase user fees. As part of the master plan process, the city worked with a consultant to develop a matrix for setting fees based on how much the program or service benefits the community versus the individual.

However, board member John Nalbandian said that in hearing people speak about their use of the recreation centers, there was a key factor that matrix excluded.

“The matrix that suggests those who benefit individually should pay, that makes sense except when the individual benefit contributes to the public good,” Nalbandian said. “And that’s what I heard people saying.”

The board’s draft report to the commission includes a “statement of overall concern,” which states that the city manager’s request that the department reduce the transfer from the city’s general fund to the recreation fund led to a “quickly assembled” set of revenue additions and expenditure reductions, some of which have uncertain assumptions and unknown outcomes. It goes on to state that in the absence of good data, the department runs the risk of missing budget targets and reducing access to recreation facilities, especially for low-income and historically disadvantaged residents.

The report also lists positive aspects of the proposal, including improved security, usage data, revenue and support of the master plan’s cost-recovery goals. The board requested more time and access to data gathering and analysis resources to study the proposal, noting that the Lawrence-Douglas County Health Department has offered assistance. The draft report is available on the city’s website.

The board requested that the recreation budget proposal be discussed at the City Commission’s July 9 meeting, and appointed Hull to represent the board.