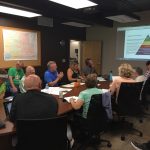 The Lawrence Parks and Recreation Advisory Board expressed concern that a proposal to charge entrance fees at the city’s recreation centers would negatively affect low-income residents and agreed to further study equity issues.

At their meeting Monday, board members reviewed the Parks and Recreation Department’s 2020 budget proposal to charge entrance and other fees, as well as other expenditure cuts proposed by the department. The department is projecting an approximately $675,000 budget gap in its recreation fund, and in addition to fee increases is also proposing closing the Community Building for drop-in recreation and instituting a fee at the South Park wading pool, among other changes.

Board Chair Marilyn Hull said it seemed the department was being asked to make some extremely significant changes in one year. She said the board needed to further study the issue before making a recommendation regarding the changes.

“That concerns me just as a management practice,” Hull said. “And I don’t think we are ready today to sit here and assess what the impact of all these changes are, including taking a building offline for free play and then possibly selling it at some point. There are a bunch of issues embedded in this, and the fee proposal is one of them.”

Assistant Parks and Recreation Director Mark Hecker told the board he realized both entrance fees and partially closing the Community Building would be controversial, but that the two ways to address the department’s budget gap are to increase revenues and reduce expenditures. He added that the list of proposed fees and cuts was still a work in progress.

“The theme in a lot of this is what are we not charging for that we possibly could charge for,” Hecker said.

Hecker told the Journal-World after the meeting that even if all the proposals were adopted, the department still has about a $50,000 budget gap remaining, given current revenue projections. A summary of the proposals city staff presented the board is as follows:

• Entrance fees: The new proposal would increase security by requiring key cards to enter recreation centers and would charge annual entrance fees based on age, ranging from $24 to $48 annually and more for nonresidents. Those under 18 would only be charged $5 to purchase a key card. The actual revenue is unknown, but it is estimated to generate about $175,000.

• Community Building: The proposal would close the building for drop-in public use and begin the process of “divesting” from the building. The building would close for open public use in 2019 but remain open for scheduled recreation programs and reservations. The changes would allow a net decrease of 1.5 staff positions through attrition. The estimated expenditure reduction is $101,000. The proposal also calls for eventually selling the building and using the proceeds to add more space at the remaining three recreation centers.

• Increase sponsorship: The program would hire an outside consultant that would work on a contracted commission fee to increase sponsorship program revenue. The actual revenue is unknown, but it is estimated to generate about $100,000.

• Building and athletic field rental increases: The proposal would increase rental rates for high-use rooms and athletic facilities. The estimated revenue increase is $27,000.

• Wading Pool at South Park: Currently, people can use the wading pool for free. The proposal would charge a $1 entry fee per person to help offset the cost of the facility. The estimated revenue increase is $5,000.

• Recreation class fees: The proposal would increase class fees in accordance with the department’s cost-recovery model. The estimated revenue increase is $32,000.

The City Commission on May 21 directed the board to review the proposed entrance fees, including the need for a fee, the proposed fee structure and alternative options for closing the funding gap. The commission also asked the board to consider the impact of entrance fees on low-income residents and health equity in the community. At the time the commission gave its direction, the other fee increases and cuts had not been publicly proposed.

As part of its meeting Monday, the board received a presentation from the Lawrence-Douglas County Health Department regarding its recently published Health Equity Report. The report found that Douglas County residents who earn less than $35,000 are more likely to be in poor physical and mental health. Dan Partridge, director of the health department, told the board that when people have access to recreation facilities, health outcomes increase.

The subcommittees’ findings will be providing to the full board at a special meeting at 5:30 p.m. Thursday, June 20 at the Lawrence Parks and Recreation Department Administrative Office, 1141 Massachusetts St.

Clarification: The Parks and Recreation Department has clarified that the entrance fee for those under 18 is a one-time fee to purchase the key card.