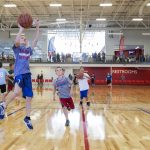 In this file photo from October 2014, Mason Lester lofts up a shot while his brother Owen watches as the two play on the basketball courts at Sports Pavilion Lawrence.

City leaders expressed concern about charging entry fees for the city’s recreation facilities, and officials said they would have to weigh such changes against other options to balance the budget as part of the upcoming 2020 budget process.

The department is proposing entry fees at the Prairie Park Nature Center and the city’s four recreation centers: the Community Building, East Lawrence Center, Holcom Recreation Center and Sports Pavilion Lawrence. Fees would vary depending on age, ranging from $5 for children for an annual entry card to $48 annually for some adults, according to a city staff memo to the commission. Daily passes and discount passes for low-income residents would also be available.

Regarding the recreation centers, Parks and Recreation Assistant Director Mark Hecker told the commission that in addition to the cost of constructing the buildings, there is the ongoing cost of operating and staffing the buildings. For Sports Pavilion Lawrence — the city’s most recent and controversial recreation center — Hecker said that although it was never expected that the department would recoup 100 percent of the operating costs, the department was getting back less than it originally expected.

Specifically, Hecker said that when the pavilion was originally proposed, the best-case scenario was that the city could recoup about $700,000, or about 70%, of the pavilion’s $1 million operating costs through fees, tournaments and sponsorships. However, he said that the department had decided not to use sponsorships and that currently the city is recouping about 60% of the operating costs and therefore contemplating an entry fee for all recreation facilities.

Commissioner Matthew Herbert asked why sponsorships were not pursued, and City Manager Tom Markus said that he thought that was somewhat of a political decision due to concerns about having private companies sponsor a city facility. Herbert said that the idea behind the pavilion was that it would be free to the public, and that he thought the city needs to look to other options, including sponsorships, before charging a user fee.

“I don’t think that there were assumptions, I think that there were statements made that this facility was going to be free,” said Herbert, noting the options were to raise the mill levy, charge entry fees or pursue partnerships. “Given those three scenarios, I’ll tell you right now I’m completely open to sponsorships. And I think that’s a conversation we have to have.”

Mayor Lisa Larsen and Commissioner Stuart Boley also said they think the Parks and Recreation board should provide feedback on the proposal to charge entry fees. Larsen was particularly concerned about how entry fees would affect low-income families and whether the department had any data on the topic.

In addition to the proposal to charge entry fees, Markus said that city staff intends to bring multiple options to the commission to address the Parks and Recreation budget as part of the 2020 budget process this summer, including sponsorships and cuts.

“It’s going to be on your table to decide, and you’ll see the choices that you have, and all of them have consequences,” Markus said.