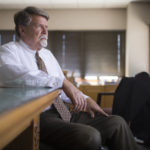 The City of Lawrence will soon host a public reception for outgoing City Manager Tom Markus.

Markus, who began his position in March 2016, announced in September that he planned to retire this year, and Tuesday will be his last commission meeting. Incoming City Manager Craig Owens will begin his employment with the city on July 1.

The public is invited to the reception for Markus as well as to the presentation of the recommended 2020 budget and the City Commission meeting. Light refreshments will be provided at the reception.

• City leaders grateful for changes Markus made at City Hall, begin to consider next city manager