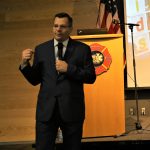 Michael Baker of Tulsa presented his body of work and plans if chosen to be Lawrence's new fire chief. He was one of three candidates that presented on Saturday, June 8, 2019, at the Lawrence Public Library.

The Lawrence firefighters union has endorsed Michael Baker for the next fire chief of Lawrence-Douglas County Fire Medical.

The association of Lawrence Professional Firefighters, Local 1596, voted unanimously at a meeting Monday to publicly endorse Baker, according to a news release from the union.

Baker is one of three candidates for the vacant fire chief position and the only outside candidate. The other two candidates are interim Fire Chief Shaun Coffey and Division Chief Tom Fagan. Baker is the emergency medical services chief for the Tulsa, Okla., fire department.

The release states that Baker posses the leadership qualities and professional insight to motivate, inspire and lead the department and the community it serves into the future and urges City Manager Tom Markus to hire him.

“Chief Baker has displayed an impressive amount of professorial credibility through his diverse background functioning in many different roles within public safety,” the release states. “He is also a nationally recognized educator and published author within the emergency service industries.”

Also mentioned in the endorsement were Baker’s academic accomplishments, leadership style and his role in community behavioral health programs.

As the Journal-World previously reported, the three candidates participated in a question-and-answer session Saturday, where they all said recruiting firefighters and paramedics would be a big challenge for the next chief. Markus told the Journal-World at the time that he planned to name the new chief later this month, probably in the week of June 16.