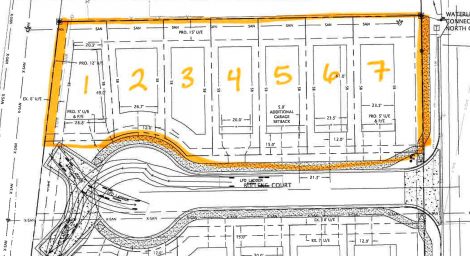 City leaders have approved funding for four affordable housing projects, including a development that will create the city’s first neighborhood of small homes.

The Lawrence City Commission recently voted to award $250,000 from the city’s affordable housing trust fund to four projects, with the largest award going to a project proposed by Tenants to Homeowners. As the Journal-World previously reported, Tenants to Homeowners is partnering with others on the overall development, called the Burroughs Creek Trail Addition. The affordable housing component of the project will construct seven affordable small homes that will be part of the first-of-its-kind housing development.

The project, which the city awarded $125,000, calls for a new small-home development near Bullene Avenue and 19th Street, according to the project’s funding request. The two- and three-bedroom homes will be priced between $100,000 and $125,000 and have energy-efficient all-electric construction to provide low utility costs. The homes will be sold to income-eligible households at $50,000 below market value.

Example plans provided by Tenants to Homeowners include two- and three-bedroom homes ranging from 600 to 1,200 square feet, but the planning commission has not yet approved the project’s final platting, according to the application. The lots will be ready for construction early next year, and the houses will be complete by the summer and fall of 2020. Tenants to Homeowners will own the land for the affordable homes and restrict resale prices so that the homes will be permanently affordable.

The city’s Affordable Housing Advisory Board received funding applications from six projects, and following an evaluation process earlier this summer provided its funding recommendation for the four projects to the commission. The commission voted unanimously to approve the board’s recommendation as part of its meeting July 16. There will be a second round of funding later this year, which will distribute a larger amount of money that includes proceeds from the city’s new affordable housing sales tax.

A summary of the three other projects awarded funding this round is as follows:

• $50,000 for a Lawrence Habitat for Humanity project, which will provide two affordable homes. The project will build one new home and renovate a second home purchased in foreclosure. The homes will be sold to families with incomes at or below 60% of area median income.

• $50,000 for the New Horizons Transition Housing Program, which is run by the Lawrence-Douglas County Housing Authority and Family Promise of Lawrence. The funding is to be used for either housing vouchers and/or support services.

• $25,000 for the Independence Inc. project. The project will expand the organization’s existing program that helps pay for accessibility modifications to the homes of people with disabilities. Applicants’ total household income cannot exceed 80% of area median income.

The two affordable housing projects that did not receive funding this round were the Penn Street Lofts project in the arts district in East Lawrence and a project proposed by Wheatland Investments Group to construct apartments for people age 55 and older. During its evaluations of the funding applications, the board noted that both those projects could be considered during the next round of funding, according to a city staff memo to the commission.