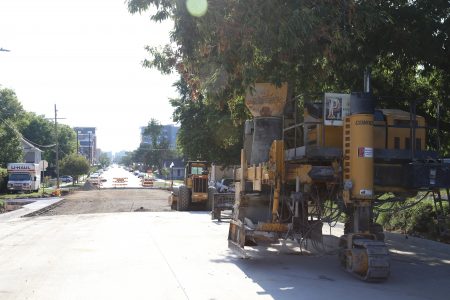 One of Lawrence’s ongoing road projects could be complete as soon as next week, and most of the rest are on track to finish around the start of University of Kansas classes in late August, the city says.

Crews were finishing work Friday on a new asphalt surface for 23rd Street between Louisiana Street and Learnard Avenue, according to Josh Carson, a spokesperson for the city’s municipal services and operations department. Some lanes will remain closed through next week while final adjustments, landscaping and cleanup work are done, Carson said. 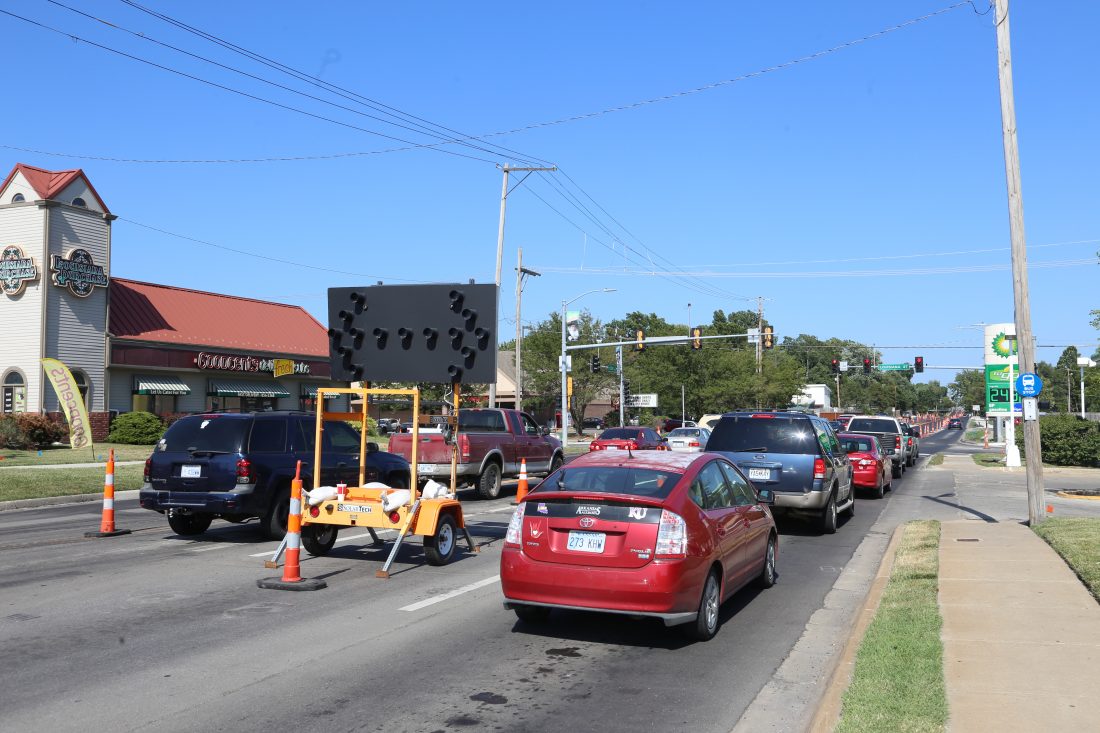 Lanes are closed for construction on Friday, July 19, 2019 at the intersection of 23rd and Louisiana streets.

The $1.15 million project, which began in 2018, widened the street to install a center turn lane, replaced water lines and installed sidewalks along the roadway, the Journal-World previously reported.

The work along 23rd Street was one of a handful of projects facing Lawrence drivers this summer.

• The long-running reconstruction of Kasold Drive from Sixth Street to Bob Billings Parkway, which began in March 2018, was in its final stages at the end of May, and after some delays, has since wrapped up.

• A project to add a right-turn lane from Sixth Street to Tennessee Street began in late June and has caused some closures along those major roadways in the downtown area. That construction is still on schedule to finish by the end of August, Carson said.

• The overall reconstruction of East Ninth Street from New Hampshire to Pennsylvania streets has been ongoing since summer 2018. The latest phase of the project, which focuses on an area from New York to Pennsylvania streets, should be completed by mid-August, Carson said. A wet spring and additional sewer work caused delays, Carson said, but some traffic may be able to move through the area as soon as the end of this month, or early August. 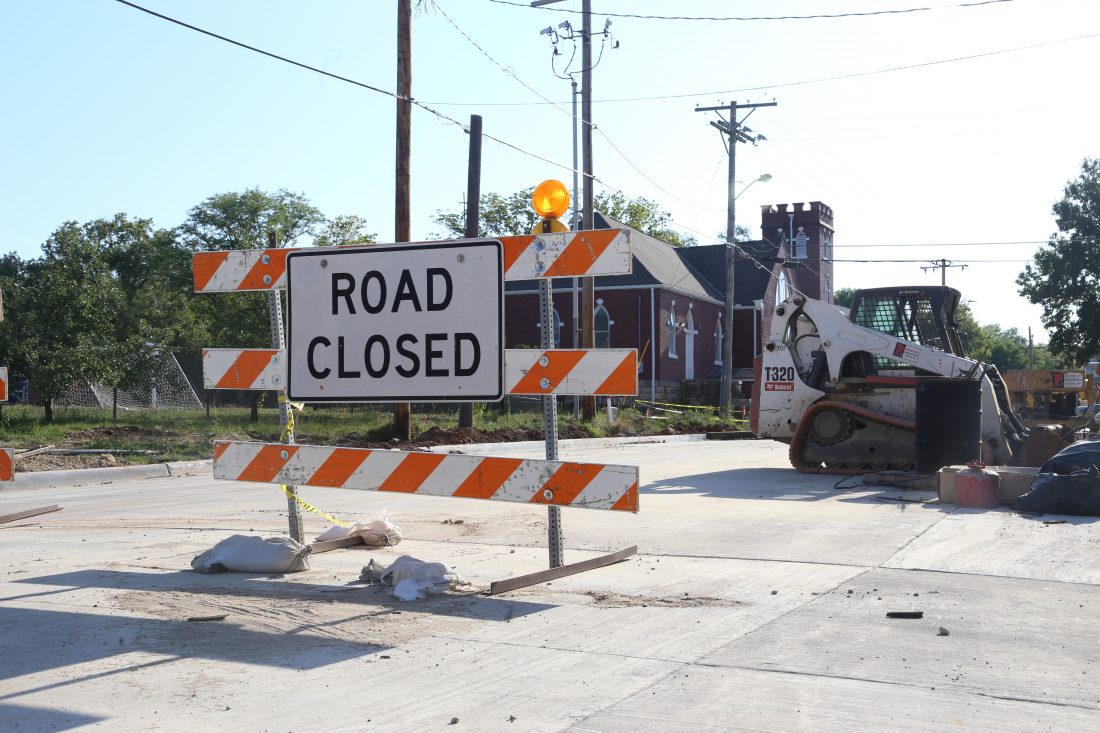 A barricade blocks the road at the intersection of Ninth and New York streets on Saturday, July 20, 2019.

• Part of the street, from Ellis Drive on KU’s campus to Ousdahl Road, is set to reopen by mid-August, Carson said. However, it’s part of a larger reconstruction of the roadway between Iowa and Naismith Drive that also includes ongoing work at the intersection of 19th and Iowa.

• The intersection at the southwest corner of KU’s main campus has been closed since March and delays will push construction into September and October, Carson said. Crews have been building pedestrian tunnels under the intersection as part of a collaboration between the city, KU and the Kansas Department of Transportation, which is funding about 80% of the project, the Journal-World previously reported. Carson said the project is still within budget, despite delays caused by rainy weather, as well as utility conflicts and additional work to install a retaining wall and replace a storm sewer. The intersection should open by the end of September, and the entire project should be done in October, Carson said. 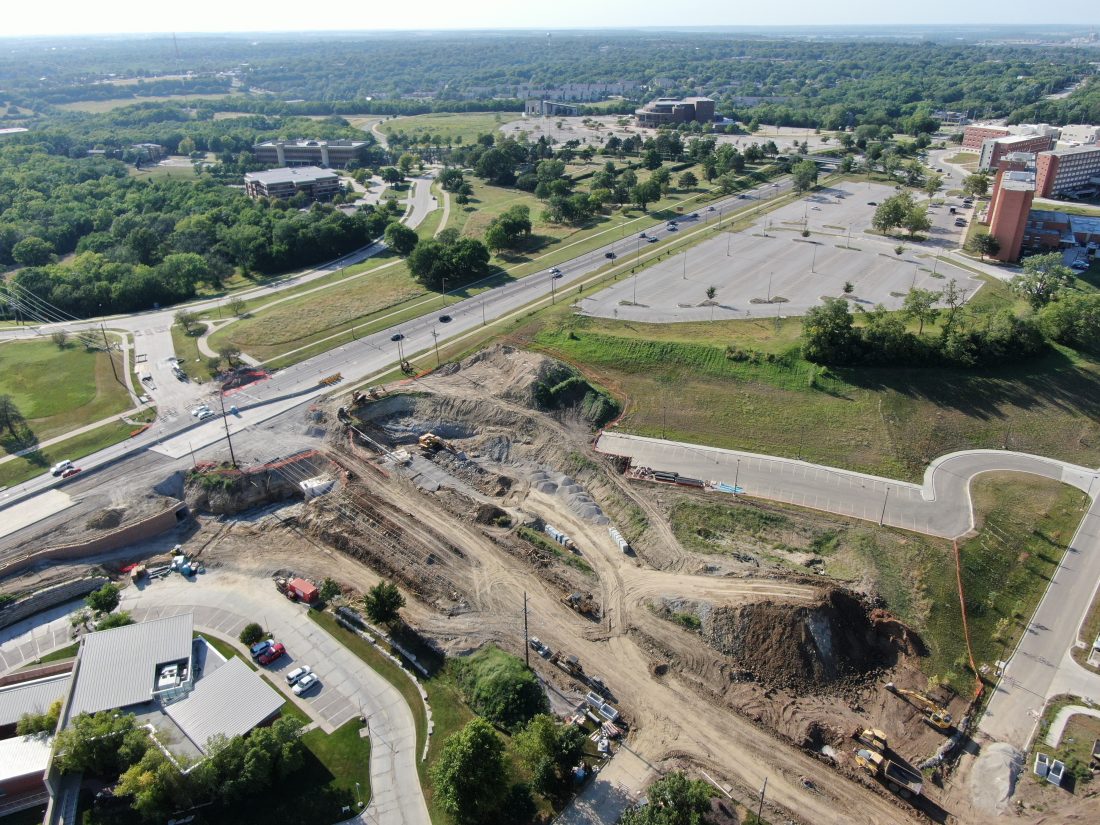 • A water line replacement project from 19th to 23rd streets that began at the end of May and most recently has caused closures between 20th and 22nd streets is scheduled to finish by mid-August, Carson said.

As for what’s next, Carson said the city would begin the second phase of its Safe Routes to School project in late August. That project will help fill gaps in the sidewalk network and will focus on areas where students have been known to bike and walk to school. Those areas include stretches of Harvard Road and Yale Road near West Middle School, a stretch of Princeton Boulevard near Deerfield Elementary, part of Michigan Street near Pinckney Elementary and part of 15th Street near Liberty Memorial Central Middle School.

Carson said that, although some of the recent projects have been frustrating for residents, “in the long run, it’s going to make things so much better for everyone.”

“These aren’t just happening to happen. It’s a strategic plan to move toward a better environment for the citizens and make things easier, all around, for them,” Carson said.