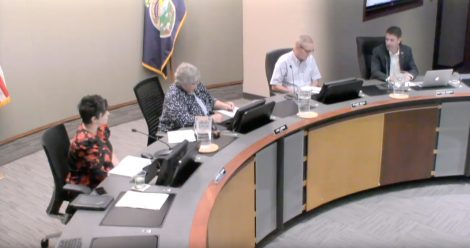 The Lawrence City Commission on Tuesday voted to publish a 2020 budget with a 0.5 mill property tax increase, but commissioners said they were still planning to make cuts later to hold the mill levy flat.

During a work session last week, the commission agreed to make hundreds of thousands of dollars in cuts to the proposed budget to keep property taxes from rising. Those cuts include a $144,000 decrease in the Lawrence Community Shelter’s allocation and a $20,000 cut to the Lawrence chamber of commerce’s funding.

Commissioners said they still planned to make those cuts before approving the final budget next month. The 0.5 mill increase was only there to give them more flexibility, they said. Once the budget has been published, the commission can make spending cuts, but it can’t raise the total amount of spending.

“It gives us that flexibility to have conversations with community partners,” Commissioner Matthew Herbert said, referring to the Lawrence Community Shelter and the local chamber of commerce. “It gives us a little wiggle room, and I think that’s a smart move.”

Other cuts the commissioners previously agreed to include a $150,000 cut to the Special Gas Tax Fund, which is used for street maintenance projects; a $100,000 cut to the capital improvement project reserves fund; and a $30,000 cut to the funds that are being used to replace trees in Lawrence that were damaged by emerald ash borer infestations.

Mayor Lisa Larsen said some of the organizations that are part of the planned cut were “dear to my heart,” but she agreed with the commission’s plan to make those cuts.

In other business, the commission approved increasing spending for the design process on the Lawrence Loop Trail, a planned trail system that will someday encircle Lawrence.

The approval increases spending by $75,000 for the city’s engineering services agreement with Bartlett & West, a local engineering consulting firm providing design services for two new portions of the trail. The increase in spending brings the cost of the agreement to a total of $180,000.

The commission previously approved $105,000 of spending for Bartlett & West to provide design services for a planned trail pathway from Eighth Street to 11th Street adjacent to an abandoned section of railroad track in eastern Lawrence and on 29th Street from the Burroughs Creek Trail to Haskell Avenue.

The extra money will allow Bartlett & West to create a conceptual design to extend the planned pathway from Eighth Street to Constant Park, which is on the corner of Sixth and Kentucky streets.