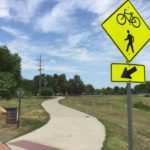 Part of the Lawrence Loop trail near the intersection of 12th and Oregon streets is pictured on Monday, July 16, 2018.

The Lawrence City Commission on Tuesday will consider allocating funding to continue design progress on the Lawrence Loop, a planned trail system that will someday encircle Lawrence.

The commission will consider increasing spending by $75,000 on conceptual design fees for two new portions of the trail, which would create a trail pathway from Eighth Street to 11th Street adjacent to an abandoned section of railroad track in eastern Lawrence and on 29th Street from the Burroughs Creek Trail to Haskell Avenue.

The city previously allocated about $105,000 for conceptual design fees for the project, which covered the 29th Street portion of the project. If approved, the amended spending would bring the total cost of the conceptual design to $180,000. Bartlett & West, a local engineering consulting firm, is providing the service.

In February, the city received a $480,000 grant from the Kansas Department of Transportation to complete two sections of the trail. The grant required a 20% match and other funding from the city, including engineering and conceptual design fees.

Currently, four gaps exist in the loop. Once completed, the Lawrence Loop will provide a continuous 22-mile concrete path around Lawrence, with connector trails linking it to neighborhoods.

• The commission will consider authorizing the publication of its 2020 fiscal year budget with a maximum expenditure that includes a 0.5 mill levy increase.

Although the commission came to a consensus during its work session last week to make various cuts to the budget to remove the mill levy increase, Mayor Lisa Larsen said that the commission would likely give initial approval to the budget with the increase to provide the city with some flexibility.

• The commission will hear a report on its strategic plan.

The commission adopted a strategic plan in March 2017, focusing on eight priority initiatives. City staff will give its triannual update on the progress of the initiatives.

• The commission will consider giving approval to an ordinance requiring certain bar and restaurant staff to undergo sexual violence intervention training in order to get their local liquor licenses.

The ordinance is listed as part of the commission’s consent agenda, which means the commission may approve the item without discussing it.

Some businesses would be exempt from the ordinance, such as liquor and grocery stores that do not allow the consumption of alcohol on their premises and businesses where alcohol sales makes up less than 25% of revenue.

The ordinance’s wording does not identify any particular training provider and instead allows licensees to choose their own trainer so long as the trainer is “qualified.” Who would be required to pay for the training is still unclear. If the city would pay for all or part of the training, city staff noted that the Special Alcohol Fund would be an appropriate source, according to city documents.