Rates for various city services set to increase for 2020 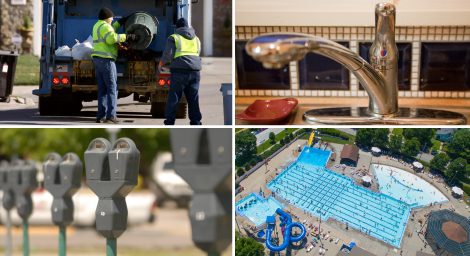 In 2020, Lawrence residents will see various fee increases for city services, including trash, water, downtown parking and admission to the city’s pools.

The arrival of a new year will bring various fee increases for city services, including water, trash and admission to the city’s pools.

The Lawrence City Commission approved the fee increases as part of its 2020 budget process, which concluded this summer. While the budget for the upcoming year did not increase the city’s property tax rate, it did increase various fees and fines.

One of the biggest increases is for water and sewage service, which will increase by 8%. The rate increase comes as the city moves forward with modernization of its water metering system. Currently, the city uses mechanical meters that must be read monthly by city staff. It will be replacing them with automated meters that provide customers and the city with continuous usage data.

Stormwater and solid waste rates will each increase by 3%. In total, the average city utility bill, which includes water, sewer, stormwater and solid waste services, will increase by about $78 annually, according to budget documents. The increases will result in an average monthly utility bill of about $103, which is based on a household that uses 4,000 gallons of water per month.

A summary of the various increases, compiled by the Journal-World, is as follows:

Water and sewage rates: City water and sewage rates will increase by about 8% beginning Jan. 1. Those increases will be the base rates for a new rate structure that will begin in the spring. Starting in May, if customers use significantly more water than their average consumption, they will be charged 10% or 15% more for those extra gallons, as the Journal-World previously reported.

Sewer rates will increase from $7.47 to $8.14 per 1,000 gallons of water. Monthly meter charges for both water and sewage service will also increase. Collectively, all the increases amount to an approximately 8% increase.

Solid waste: Trash, recycling and yard waste collection rates will increase by 3% beginning Jan. 1. Rates for residential solid waste customers who use the standard 65-gallon trash cart will increase from $18.80 per month to $19.36 per month, or by $6.72 annually. Commercial rates and dumpster rental rates will also increase. All of the increases are detailed in changes to the city’s resolution.

Downtown parking fees and fines: The commission increased downtown parking rates and fines as part of the 2020 budget process, but those changes won’t go into effect until July 1, 2020. The additional revenue will help fund projects to modernize parking downtown, as the Journal-World previously reported. The commission elected to delay the changes after city staff met with members of Downtown Lawrence Inc., and the members requested that the city delay the new rates until the new parking technology was in place, according to a city staff memo to the commission.

Pool fees: The daily admission fee for the city’s outdoor and indoor aquatic centers will increase by $1 beginning Jan. 1. Admission will increase to $5 for children ages 3 to 17, $6 for adults and $5 for adults ages 60 and older.

The 2020 entrance fee increase is the second of two increases in pool fees. In April 2018, the commission voted to increase pool entrance fees by $2 over the next two years and stop providing free entry to 3- and 4-year-olds. Children 2 and under are still admitted for free.

The 2020 lot rate increase is the second of five $50 increases scheduled to take place, with rates projected to increase by $50 each year through 2023. A more expensive nonresident lot space was also added in 2019. Parks and Recreation Director Derek Rogers previously told the Journal-World that a portion of the additional revenue would go into a newly created general maintenance fund for the cemeteries to help care for the cemetery grounds.