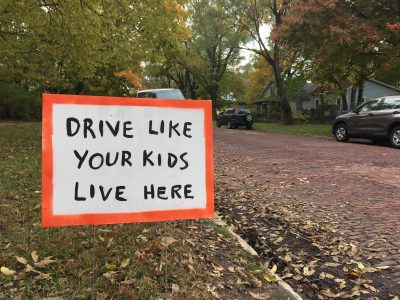 In this Journal-World file photo from Oct. 26, 2018, a handmade sign in East Lawrence at the intersection of East Eighth and New York streets reminds motorists to drive slowly through residential neighborhoods.

City leaders have hired a consulting firm to create a traffic safety campaign to help reduce speeding in neighborhoods.

Earlier this month, the Lawrence City Commission approved a $114,904 contract with Alta Planning and Design for the Safe Neighborhood Speeds Education and Outreach Campaign. Engineering Program Manager Amanda Sahin said in an email to the Journal-World that multiple sources of information indicate speeding is a problem in neighborhoods.

“It is evident from the volume of traffic calming requests, submissions on the Traffic Safety Concerns web form, and from speed data that staff has collected, that speeding is a pervasive issue in Lawrence neighborhoods,” Sahin said.

Sahin said that the commission approved a work plan this summer with a primary goal of reducing speeds on neighborhood streets throughout the community. She said the work plan will address speeding through multiple methods, including traffic enforcement, traffic engineering and education. The campaign addresses the education portion of the effort.

As part of the campaign, Alta will begin the yearlong project by more specifically identifying targets of the campaign, and will then develop a “menu” of potential campaign concepts, according to the contract approved by the commission.

“The menu will include potential campaign slogans that draw attention, increase awareness, and evoke the desired feeling of the campaign, as well as calls-to-action intended to change behavior,” the contract states.

The city will review the campaign concept options and provide comments about the preferred style of campaign messaging before Alta finalizes the messages. The campaign will include up to four unique messages and could also include one overarching slogan if desired.

An example provided from a traffic safety campaign that Alta created in Eureka, Calif., was provided. The overarching slogan of that campaign was “Heads Up,” and there were four campaign messages: expect people in crosswalks, disconnect from distraction, use the crosswalk and see and be seen. Another example was the slogan from a Sacramento campaign: “We drive slowly; our lives are worth it.”

Once the campaign message and design are finalized, campaign efforts can include social media, online or print advertisements; printed signs such as posters, banners and yard signs; educational resources such as brochures or informational cards; and promotional materials such as T-shirts, tote bags and bumper stickers. In addition, Alta recommends direct community outreach and education, such as tabling at community events, outreach public locations or going door to door.

The upcoming campaign represents a new approach to traffic issues for the city, as the Journal-World previously reported.

Last December, the commission adopted a new traffic calming policy that focuses more on educating drivers. Under the previous policy, neighborhoods requested traffic calming measures, such a speed bumps, traffic circles or other physical devices, and the city decided whether or not to approve additions based on traffic volume and median speeds on the roadway. In addition to physical devices, the new policy also uses methods such as traffic enforcement and education campaigns to improve neighborhood traffic issues.

The city selected Alta after reviewing proposals from five consulting firms, according to a city staff memo to the commission. Alta will begin the yearlong project in January by holding a meeting with city staff and other stakeholders and reviewing crash data, survey results and other data to inform the campaign. The contract states that at that time the city and consultants will also discuss how the campaign will coordinate with other efforts, such as speed limit reductions or enforcement.