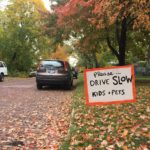 Lawrence city commissioners will soon consider whether to adopt a more comprehensive approach to neighborhood traffic problems that would go beyond adding speed bumps or other devices to streets.

Earlier this year, the city announced it was re-evaluating its traffic calming program, which attempts to address issues such as speeding and cut-through traffic by adding physical devices such as speed bumps or traffic circles. At its meeting Tuesday, the commission will consider a new traffic calming policy that also includes traffic enforcement and monitoring, among other ways to address problem traffic.

In addition to physical devices, or traffic engineering, the new policy aims to improve traffic issues in neighborhoods through enforcement, education and evaluation. City traffic engineers said that only adding speed bumps or other devices to streets is not necessarily the most effective action.

“The current policy promotes a rigid engineering response to neighborhood traffic concerns and inhibits the use of alternative, possibly more effective traffic management measures,” Transportation Engineer Amanda Sahin wrote in a memo to the commission.

Sahin wrote that speeds bumps or other devices can have limited scope, focusing on individual streets or even individual blocks, and that there are no methods in place to assess the effectiveness of those devices. She also said the policy does not attempt to address traffic concerns such as motorists not yielding to pedestrians or failing to stop at stop signs.

As part of the new program, a work plan detailing traffic initiatives would be developed annually, according to the memo. Those actions could include strategic traffic enforcement in neighborhoods, public education campaigns or evaluations of traffic management strategies. They could also include the purchase of tools for data collection and the purchase of temporary speed bumps or other devices.

City staff is recommending replacing the existing traffic calming policy with the new neighborhood traffic management program and allocating $300,000 annually toward traffic efforts or projects, according to the memo. Those budget decisions, though, would not be finalized until the city’s annual budget process. The city currently allocates $200,000 annually for traffic calming projects.

Last month, the city announced it had created a website for residents to report traffic safety concerns and to potentially get improvements made to roadways and increase traffic enforcement by police. Specifically, the website provides an online form for residents to report concerns such as vehicles speeding, ignoring school zones, running stop signs, making illegal turns, failing to yield at crosswalks and other hazardous behavior.

The city’s traffic calming policy was enacted in 2005. Under that program, neighborhoods request traffic calming measures and the city decides whether or not to approve additions based on traffic volume and median speeds on the roadway. When the city decided in January to re-evaluate the policy, it stopped evaluating new traffic calming requests, but there were already more than a dozen projects that had been previously approved and were awaiting funding.

Currently, there are 16 unfunded traffic calming projects totaling about $500,000, some of which have been unfunded for more than 10 years, according to the memo. Staff is recommending that the existing traffic calming list not be completed and that the new program begin with the 2019 budget year.