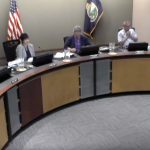 The budget also does not fully fund a request from the Lawrence Community Shelter, which is seeking a funding increase from both the city and the county for 2020. Amid a funding shortfall, the shelter requested that its total governmental funding for 2020 increase from $310,000 to $800,000. The shelter recently announced plans to cut its capacity by approximately half.

Commissioners took a first step in approving the budget at their meeting last week, and they did discuss further increasing funding for the shelter. However, that discussion subsided after Mayor Lisa Larsen suggested that the commission review the city’s sales tax receipts early next year to see if they outpace current projections, which could enable the city to do a funding amendment to provide the shelter with additional money. Currently, the budget calls for the city matching the $296,000 the county plans to provide the shelter. The shelter requested the city provide $504,000.

Other elements in the budget would affect downtown parking, recreation facilities and commissioner pay.

Under the budget, most downtown parking rates and fines would double, with the additional revenues going to fund projects to modernize parking downtown. The budget also makes about a dozen changes to eliminate recreation facility entrance fees and keep the Community Building open for drop-in use, changes that were included in former City Manager Tom Markus’ recommended budget. The budget provides the commission its first pay raise in 20 years and would increase commissioner pay to $22,044 annually.