If appeal fails, KU could be facing postseason ban, coaching suspensions, other penalties 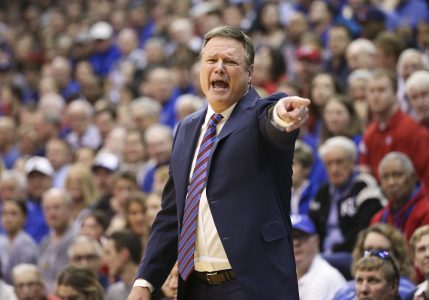 Kansas head coach Bill Self gets the attention of his players late during the second half, Saturday, Jan. 4, 2020 at Allen Fieldhouse.

A lot is riding on the University of Kansas’ 149-page, often blistering, denunciation of the NCAA allegations against the school’s vaunted basketball program.

If KU’s appeal ultimately fails, the men’s basketball program could be facing a postseason ban — beginning next season — that would end the school’s soon-to-be record 31 consecutive appearances in the NCAA tournament. Hall of Fame coach Bill Self could face a major derailment of his career by being hit with a show-cause penalty — essentially a suspension from the college game. And the team might have to vacate some of its victories from the 2018 Final Four season because of current player Silvio De Sousa playing while ineligible.

• In response to NCAA, KU argues evidence does not support allegations of violations

The university and its legal team at the Overland Park-based law firm Bond, Schoeneck & King made several key arguments demonstrating how it plans to fight serious allegations of misconduct within the men’s basketball program, arguing the NCAA is misinterpreting rules and improperly using evidence from a fraud trial, among other arguments.

The effectiveness of the arguments made Thursday as they relate to KU — by far the most high-profile program implicated in the 2017 Adidas scandal that rocked the sport of college basketball — remains to be seen.

KU fans, though, may want to watch a similar case that is unfolding at North Carolina State University. The case alleges the same Adidas representative at the center of the KU scandal — T.J. Gassnola — funneled money to the father of high-profile prospect Dennis Smith Jr. with knowledge and consent from former coach Mark Gottfried. Smith has denied receiving any payment during his recruitment.

NCAA Enforcement staff vehemently disagreed with the case the Bond, Schoeneck & King firm laid out. In particular, the NCAA forcefully argued that it could use evidence from the federal fraud trial as sufficient corroborating evidence to justify sanctioning N.C. State.

Kansas City-based sports law attorney Mit Winter told the Journal-World that the issue of whether the trial evidence can be used against the schools will be the key aspect to watch in these cases moving forward.

The NCAA adopted a bylaw in 2018 that allowed evidence previously introduced in court to be included in its enforcement process and infractions decisions, as long as the facts are established by a decision or judgment and are not under appeal.

But that bylaw hasn’t yet been put to use to justify actual sanctions against programs accused of facilitating payments to players during the recruitment process. Winter said it’s smart for the schools to argue that the NCAA Committee on Infractions — which issues punishments — shouldn’t place much consideration on evidence from the criminal trial.

“These are the first cases where this new bylaw is really being put to the test,” Winter told the Journal-World in an interview Wednesday. “KU is going to argue the hearing panel shouldn’t rely very heavily on information that came out during trials.”

While both sides in the N.C. State case have made their arguments, the university is still awaiting a final ruling from the NCAA. It likely will come before KU receives its ruling in the summer or early fall. While the case is worth watching, Winter also cautions that predicting NCAA rulings can be difficult. The NCAA rarely relies on precedent from one case to another when it issues punishments, he said.

“They have prior cases that are similar to current cases — whether it’s KU or one of the other cases — but just because they did something in one case two years ago doesn’t mean they’ll reach the same decision now,” he said.