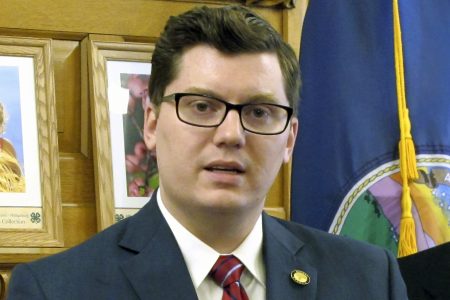 In this April 18, 2017, file photo, state Sen. Jake LaTurner, R-Pittsburg, speaks to reporters after his appointment as state treasurer by Gov. Sam Brownback during a news conference at the Statehouse in Topeka, Kan. LaTurner has abandoned a campaign for an open U.S. Senate seat to challenge first-term GOP congressman Steve Watkins that he describes as vulnerable to Democratic defeat. (AP Photo/John Hanna, File)

KANSAS CITY, Mo. — The Kansas Republican challenging first-term Rep. Steve Watkins in the party’s August congressional primary has returned from a trip to Israel and is escalating his opposition to Watkins’ position on Israeli settlements.

The Kansas City Star reports that Kansas Treasurer Jake LaTurner is attempting to draw a clear contrast between him and Watkins on Middle East policy headed into the state’s Republican convention on Friday and Saturday.

Watkins, who represents much of eastern Kansas, including Topeka and Lawrence, was among five House Republicans who voted with Democrats in December for a resolution against the expansion of Israeli settlements in the West Bank and in support of a two-state solution with Palestine.

For decades, the United States agreed with the United Nations’ stance that the Israeli settlements in Palestinian territory violate international law. President Donald Trump’s administration announced in November that the U.S. would no longer consider the settlements illegal, saying any legal questions about settlements should be resolved by Israeli courts.

LaTurner has been calling Watkins soft on Middle East policy since the vote.

LaTurner traveled to Israel earlier this month, his second trip there in two years. He visited an Israel Defense Forces base near Jerusalem and an Israeli settlement in the West Bank.

“This is without a doubt a key issue for Kansas voters. Kansas voters are incredibly supportive of Israel,” LaTurner said.

“These are God’s chosen people in the ‘Promised Land’ and that is incredibly important to the Christian community across this country, but it’s also a strategic ally to the United States in the Middle East that can’t be replaced,” said LaTurner. “We need Israel and Israel needs us.”

“Skipping out on official state duties to embark on two politically motivated trips to Israel does not make Jake LaTurner smart on foreign policy in the Middle East, it makes him an ego-driven opportunist. Voters will have a clear choice between a self-serving career politician who went to the Middle East for pictures, or a seasoned war veteran who went to fight insurgents,” Piligra said.

Watkins served as an Army ranger and paratrooper in Afghanistan.

Some Republicans worry that Watkins is vulnerable to Democratic defeat in 2020, which prompted LaTurner to abandon a campaign for an open U.S. Senate seat in September to challenge Watkins. Watkins won the November 2018 election by less than 1 percentage point after emerging from a crowded Republican primary with less than 27% of the vote. The only Democratic candidate so far is Topeka Mayor Michelle De La Isla.