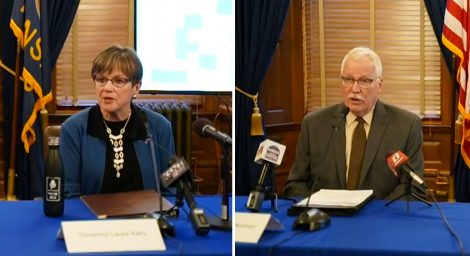 photo by: Screenshots/Kansas Office of the Governor

In the span of two hours Wednesday, the state of Kansas reported its biggest single-day increase of both confirmed cases and deaths from COVID-19, a legislative committee voted to revoke Gov. Laura Kelly’s executive order barring religious gatherings of more than 10 people, and Kelly lambasted Republican state officials for playing politics during a deadly pandemic.

The move to rescind Kelly’s order limiting the capacity of in-person religious gatherings — which took effect Wednesday morning — may have also invalidated the statewide ban on mass gatherings entirely.

Kansas House and Senate leaders, who form a seven-person group called the Legislative Coordinating Council, voted 5-2 along party lines to rescind the order.

The council’s vote came after Attorney General Derek Schmidt, a Republican, said that while the order was “sound public-health advice that Kansans should follow,” he was discouraging law enforcement agencies and prosecutors statewide from attempting to enforce the requirements. Violations of the order could have been prosecuted as misdemeanors, punishable by a fine of up to $2,500 and 12 months in jail.

Senate President Susan Wagle, a Wichita Republican, said her phone had been “ringing off the wall” since the order was passed Tuesday.

“It appears to be out of line and extreme and clearly in violation, a blatant violation, of our fundamental rights,” said Wagle, who also questioned why clinics were still being allowed to perform abortions while restrictions were being placed on churches.

“There are real-life consequences to the partisan games Republican leaders played today, and I simply cannot stand for it,” Kelly said in her daily COVID-19 press briefing. “There is no room or excuse for these petty political distractions.”

Now, instead of focusing all of the state’s energy on combating the deadly respiratory virus, Kelly said her staff has to divert attention to understanding the legal fallout from the LCC’s action. The revocation of the executive order could potentially invalidate all of Kelly’s previous actions — namely, statewide stay-at-home orders and limits on mass gatherings.

Kelly’s chief counsel is reviewing all options to address the LCC’s action, she said, and a legal challenge hadn’t been ruled out.

“Nothing is off the table,” she said. “We will do what we need to do to make sure what is in place is in the best interest of Kansans.”

The striking comments, by far Kelly’s most aggressive against her Republican colleagues since she took office last year, came shortly after the state Department of Health and Environment announced that overnight, Kansas confirmed 146 new cases of the virus, raising the cumulative total from 900 to 1,046 — an increase of 16.2% and the biggest total daily case increase since the outbreak began.

The state also confirmed 11 more COVID-19-related deaths — also the most in one day since the outbreak started — bringing the total to 38, for a single-day increase of 40%. Kelly said the somber numbers put the state “on alert,” and she chastised Republicans for taking an action that could further spread the virus.

Those numbers should be taken with the caveat that COVID-19 tests potentially have a high false-negative testing rate, according to recent research, as well as the fact that widespread testing is still not available in Kansas or the rest of the country.

KDHE last week began releasing more comprehensive data in its daily updates, which now include the testing rate in each of Kansas’ 105 counties. In Douglas County, 910 people have been tested either by the state or by private labs, and 38 cases have been confirmed positive.

The testing rate, the department said, equates to 7.44 tests per 1,000 county residents. That’s the third-highest rate among all Kansas counties.

KDHE is also tracking hospitalization rates for cases where such information is available. The department said 248 of the 771 positive COVID-19 cases that are being tracked have resulted in hospitalization thus far — a 32.2% rate for applicable cases.

Department Secretary Dr. Lee Norman, who appears with Kelly at briefings on Mondays, Wednesdays and Fridays, again reiterated that three of the 12 confirmed clusters of COVID-19 have been linked back to church gatherings.

And while Norman said he’s not a politician, he was disappointed over efforts to rescind gathering guidelines — especially since Kansas will soon reach the peak of the virus outbreak.

“It is a quick and devastating impact that gathering can have on spreading this virus,” he said.

“If we go lax at this critical juncture, lots of people will get sick very quickly. As a state health officer, I was disappointed by the actions today.”

The Journal-World has made this coverage of COVID-19 available for free, outside of the paywall on LJWorld.com.