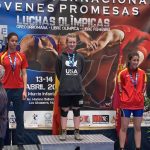 Lawrence resident and Free State High School freshman Madyson Gray, 15, is pictured on the stand after winning a gold medal in women's freestyle wrestling at the Jovenas Promesas International Tournament in Spain in April 2019.

Madyson Gray’s first wrestling season was spent, as her dad puts it, “basically getting her head pounded into the mat relentlessly.”

She lost almost every match.

“It hurt to watch, you know?” Darin Gray said. “I thought she was done.”

But Mady didn’t want to quit and find a new sport. Instead, she doubled down.

“I wanted to get better,” she said. “I wanted to prove people wrong. There was a lot of people who said I can’t do good, so I was like, ‘Yeah? Watch.'”

Two years later, 15-year-old Mady has lettered as a freshman and finished the season with an 18-5 record on the Free State High School boys wrestling team. Against girls, she was state champion and is just home from winning a gold medal at an international wrestling tournament in Spain.

Through 5 a.m. workouts and weightlifting every morning at home, a high-calorie-but-clean diet, year-round practice and competition with the Lawrence Elite Wrestling club, and being what her coach described as one of the hardest-working wrestlers on the FSHS team, Mady can now go toe-to-toe with the boys.

At the same time, she’s one of a growing number of young female wrestlers pushing for more opportunities in their sport.

On Friday, the KSHSAA board will vote on whether to sanction girls wrestling. Lentz said a vote in favor would create separate post-season, or regional and state, competition for girls.

Right now, high school female wrestlers are mixed in with the boys teams and meets, though a few schools have hosted invitational meets for girls only, Lentz said. The state tournament Mady won was an unsanctioned one hosted for the past three years by McPherson — a school with about 20 girls on its wrestling team, compared with the current two at FSHS.

Lentz said that if KSHSAA sanctions the sport for girls, many more certainly would participate, more schools would host girls tournaments and maybe even create their own girls teams.

He said when neighboring Missouri sanctioned girls wrestling, that state’s participation numbers jumped from about 200 to about 900 girls.

“We want to give them the same opportunities that we give the boys,” Lentz said.

As for Mady, besides a goal of someday making it to the Olympics, she sees wrestling as a path to a college scholarship — another category that’s growing among girls.

Her dad said roughly 60 colleges nationwide have girls wrestling teams, including some near Lawrence: Baker University in Baldwin City and Ottawa University in Ottawa. And they’re all looking for athletes, Gray noted.

Mady’s first wrestling experience was when she joined the team at West Middle School her seventh grade year.

She said she was shy and didn’t have many friends. She wanted to get involved in an activity to meet some people, and decided to give wrestling a try.

“I didn’t really know what to expect,” she said.

Turned out, despite how hard it was and how much she lost, she thought it was fun, she said.

That feeling of overpowering someone? She liked it.

She also enjoys the process of learning moves, practicing them, then pulling them off in competition.

Mady said her eighth grade season was more successful. Her off-season work paid off, she did better and she was a leader on the team.

Gray said when his daughter first told him she wanted to try wrestling, he was fine with it.

When she told him she wanted to keep wrestling after that first rough season, he was hesitant. He emphasized the discipline this particular sport takes and asked why she wanted to put herself through it.

She looked him straight in the face and, in more colorful language than could be printed, told him she wanted to win and was willing to work for it.

Roger Fincher is assistant wrestling coach at FSHS and the president and owner of the Lawrence Elite youth wrestling club.

Fincher has been with FSHS for six years and said there have been about five girls total on the team since then.

Fincher said the girls have their own locker room and do weigh-ins separately. He said there haven’t been problems, although some private schools do prohibit their boys from wrestling girls.

Gray said he has seen some boys deliberately try to hurt female opponents, probably in desperation. Luckily he hasn’t seen that with Mady.

Gray said he did see the father of a boy Mady beat yell at his son afterward, “You lost to a girl!”

Gray said he pulled that dad aside and told him to stop looking at it as a boy-girl thing.

“She was just plain a better wrestler,” Gray told him, then added a plug for sanctioning girls wrestling as its own sport if he didn’t want his son competing against girls.

Lentz of KSHSAA and Fincher of FSHS said they’re all for sanctioning girls wrestling at the high school level in Kansas.

“Anything that would open the door to more scholarships and more wrestling opportunities in general is good for wrestling, and good for girls,” Fincher said.

“I’m ready,” she said. “I’m so excited for it to be growing as quickly as it is — it’s going to be so amazing for the girls that do love wrestling.”

As for her own wrestling journey, Mady said she has learned lessons already such as the importance of sticking with something. And while she has had some success she’s not resting on her laurels; she has goals she knows will take a lot of work, namely to become a national champion and “somehow make it to the Olympics.”

She said she’s both surprised and proud of her medal at the Jovenas Promesas International Tournament in Spain.

“I’m very happy that I won it,” she said. “It makes me feel that I’ve come a long way from when I started.” 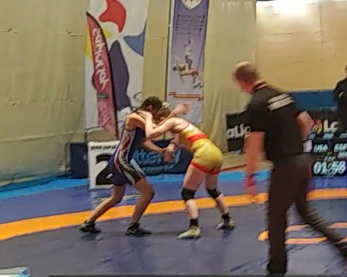