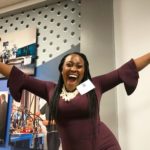 Ruth Gathunguri, a junior at Free State High School, celebrates being named the Boys & Girls Club Kansas Youth of the Year Wednesday, March 7, 2018 at the Washburn Institute of Technology campus.

Ruth Gathunguri, a junior at Free State High School, has been named the 2018 Boys and Girls Club Kansas Youth of the Year.

The Boys and Girls Club of Lawrence announced the news Wednesday night following a ceremony in Topeka where Gathunguri was officially named winner of the annual competition. In her remarks Wednesday night, Gathunguri spoke of race, bullying and the harmful effects of body shaming.

After a painful experience with bullying on her swim team, Gathunguri started playing volleyball through her local Boys and Girls Club. There, Gathunguri had finally found a place where she belonged, the 17-year-old told the Journal-World.

“In elementary school, it was a place for me just to be myself and learn how to be a leader and embrace myself and my differences and become confident in who I was,” Gathunguri said of her beloved Boys and Girls Club.

As she entered middle school, Gathunguri began volunteering at the Lawrence club, working with kindergartners. She’s learned that great leaders must also be “great listeners,” a skill she’s employed as a mentor to younger kids who may be struggling with the same insecurities Gathunguri faced after being bullied as a little girl.

“They just want somebody to listen to them and tell them they’re smart, they’re beautiful, they can be who they want to be,” Gathunguri said.

Gathunguri has career aspirations in medicine and hopes to become a nurse practitioner, ideally working in family practice. She plans to attend Johnson County Community College before transferring to Pittsburg State University.

As Kansas Youth of the Year, the Lawrence teen will now represent Kansas at the southwest regional Youth of the Year ceremony June 14 in Dallas. She’s got plenty of work to do in preparation for the big competition, but Gathunguri said the opportunity to serve as a role model for her Boys and Girls Club kids makes it all worthwhile.

“I want to inspire all my kids, and being able to win (Wednesday) night was an opportunity for me to inspire them even more,” she said.

“Working with Boys & Girls Club, I just want to represent all of my kids. I want to represent my city and show them that you can do anything even at a young age. You can be inspirational. You can be a leader. If something is bothering you in your community, you can do something about it. You don’t have to be a certain age. You don’t have to be someone glamorous. You can motivate anyone around you.”Ruth Gathunguri is so proud to represent her city, her kids, her school and her Club!! Here she is delivering her speech at the 2018 Kansas Youth of the Year ceremony.

Posted by Boys & Girls Club of Lawrence on Wednesday, March 7, 2018

• Jan. 25 — Youth of the Year winner found her ‘inner beauty’ during time with Boys & Girls Club