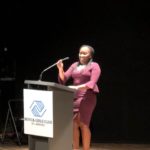 Ruth Gathunguri, a junior at Free State High School, smiles after being announced as the winner of the 2018 Youth of the Year for the Boys & Girls Club of Lawrence Thursday, Jan. 25, 2018, at Liberty Hall.

Growing up, Ruth Gathunguri, a junior at Free State High School, said there were times she felt like the “black sheep in the crowd.” All of her neighbors were white and all of her classmates were white.

She didn’t know where she fit in. That is, until she joined the Boys & Girls Club of Lawrence.

“At the Boys & Girls Club, I found my inner beauty, and it began to shine on the outside,” Gathunguri said. “Now, my role (at the club) has shifted from club member being influenced to that of a mentor doing the influencing.”

Gathunguri was named the 2018 Lawrence Youth of the Year at a ceremony Thursday night at Liberty Hall that recognized her exemplary character and leadership and that of two other finalists — Hasiya Asuku, a junior at Lawrence High School, and Christian Lapointe, a senior at Free State High School.

“I’ve had two years of a busy schedule, back and forth going across town, and you guys have always supported me through this,” Gathunguri said, thanking her family after being announced as the winner. “I’m just excited to be the Lawrence Youth of the Year. Thank you.”

Gathunguri won a college scholarship as part of the award, and will represent Lawrence at the Boys & Girls Clubs of Kansas Alliance Youth of the Year state event in Topeka on March 8.