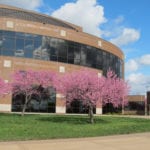 Photo courtesy of Lied Center. The Lied Center opened in 1993 on the University of Kansas campus.

The Lied Center is celebrating its 25th anniversary this fall, and all of Lawrence is invited.

Earlier this week, the performing arts venue announced Lied Loves Lawrence, a free arts and music festival slated for Sept. 14-15. The festival, featuring live performances, children’s activities and behind-the-scenes workshops for fans of all ages, is the first of many special goings-on this fall commemorating the Lied Center’s silver anniversary.

“We wanted to have a celebration to really thank the community for their support of the Lied Center over the past 25 years,” says Derek Kwan, the Lied’s executive director. “It was a real staff-led initiative in terms of brainstorming for what we could do to make it very special for the entire Lawrence community.”

That’s why Kwan and his team are making Lied Loves Lawrence free and open to all, he says. The fun begins Friday, Sept. 14, with the continuation of an annual tradition: the University of Kansas School of Music’s “Collage” concert. The showcase of KU music students and faculty starts at 7:30 p.m.

Both Friday and Saturday will be capped off with outdoor performances by Quixotic, a Kansas City-based performance art collective known for its innovative cirque-inspired routines.

Saturday’s events will include a sculpture dedication ceremony, live music, kids’ activities, food trucks, complimentary sweet treats, and workshops taking visitors behind the scenes of stage tech, movement and dance, theatrical makeup and other elements of the theater world.

Everything is free, aside from the food trucks.

The musical performances — by Harlem-based jazz and blues outfit Mwenso and the Shakes, Americana group The Steel Wheels, and New Orleans’ genre-mixing Big Sam’s Funky Nation — are representative of “the types of music that have been performed at the Lied Center” over the years, Kwan says. That includes everything from jazz and world music to Americana, bluegrass and what he calls “swamp music.”

Lied Loves Lawrence will also pay tribute to Christina M. Hixson, the sole trustee of the Lied Foundation Trust. Born into a working-class farm family, Hixson couldn’t afford college as a young woman, yet went on to bestow the $10 million gift that enabled the construction of the Lied Center in 1993.

Through the Lied Foundation Trust, Hixson, now 90, has funded projects in Kansas, Nebraska, Iowa, Washington, California, Utah and Nevada, her adopted home state. Kwan hopes she’ll visit for this fall’s world premiere of the Jazz At Lincoln Center Orchestra’s new piece celebrating the legends of KU basketball. Commissioned by the Lied Center for its 25th anniversary, the piece will be performed by the Wynton Marsalis-led orchestra on Oct. 11.

“Not surprisingly,” Kwan says, that last performance, slated for Sept. 30, “sold out well over a month ago.” In terms of “pure star power,” he says, it’ll be the biggest show the Lied Center has ever hosted.

The people have spoken, and the Lied Center, Kwan says, is listening.

“What’s important for the Lied Center to do is just to remain as relevant as possible in the community we’re in,” he says, adding, “That’s, I think, an important part of remaining relevant — really listening to the community and responding to the input that’s provided.”